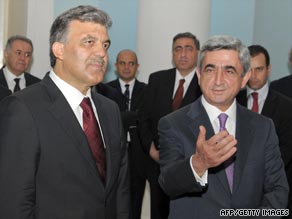 The plan would normalize relations and open the common border between the two neighbors.

Political analysts warn that there are still immense hurdles left, before Armenians and Turks can overcome nearly a century of bad blood and re-open a border that has been sealed shut for more then fifteen years.

"The protocol can be signed in six weeks, ratified by the parliament completing the process there and come into force," Turkish Foreign Minister Ahmet Davutoglu said, in an interview to Turkey's NTV news station. "However it is not known how long the approval process would be."

At least one observer noted the tenuous nature of the deal.

"I don't see it as a breakthrough, because as long as everything is tied to parliamentary approval ... you can always go back to square one," said Nigar Goksel, an Istanbul-based analyst with the European Stability Initiative, who has closely followed recent diplomacy between Yerevan and Ankara.

The border between Turkey and Armenia has been shut since 1993, after Turkey objected to Armenia's war with Turkish-ally Azerbaijan over the disputed territory of Nagorno-Karabagh. Neither country has embassies in each other's capitals.

"The United States warmly welcomes the joint statement made today by Turkey and Armenia, with Swiss participation, outlining further steps in the normalization of their bilateral relations," the U.S. State Department said in a statement released Monday.

"It has long been and remains the position of the United States that normalization should take place without preconditions and within a reasonable timeframe. We urge Armenia and Turkey to proceed expeditiously, according to the agreed framework as described in today's statement.

"We remain ready to work closely with both governments in support of normalization, a historic process that will contribute to peace, security and stability throughout the region."

Turkish-Armenian relations are often overshadowed by dispute over the massacre of ethnic Armenians in the final days of the Ottoman Empire, more then 90 years ago. Armenians accuse Ottoman Turks of committing genocide, killing more then a million Armenians starting in 1915. Modern-day Turkey vehemently rejects these allegations.

The proposed protocol for normalizing relations calls for creating a committee of international experts, to research archives and "restore mutual confidence between the two nations." But there is no mention of the disputed territory of Karabagh, which Armenian troops have controlled since the 1993 Armenian-Azerbaijan war.

"In this way Turkey is taking a step back," said Onur Oymen, a lawmaker in Turkey's opposition CHP party. He said if the protocols were put to a vote before the Turkish parliament, "we won't support them. This would damage Turkey's relations with Azerbaijan."

Many observers say the current diplomatic rapprochement between Turkey and Armenia was made possible by a dramatic round of "football diplomacy." In September 2008, Turkish president Abdullah Gul accepted an invitation to attend a soccer match with Armenia's newly-elected president in the Armenian capital.

But in interviews, Armenian President Serge Sarkisian has said he wants Turkey to make progress towards re-opening the border, before agreeing to attend a follow-up round of football diplomacy, at a soccer match scheduled to take place in the Turkish city of Bursa on October 14.