BERLIN, Germany (CNN) -- The German government raised its terrorism alert level after al Qaeda posted a video on the Internet threatening attacks in Germany if this month's elections do not come out the way the terrorist organization wants. 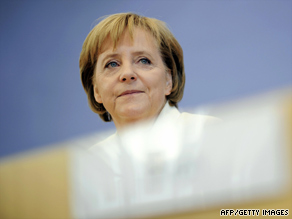 "The federal elections offer a special [opportunity] for propaganda and operative activity by terror groups," the Interior Ministry said on Friday. "A new video posted on September 18 by al Qaeda underlines this. The security services have therefore increased the threat level, which leads to increased security measures especially at airports and railway stations."

The ministry added that it has noted an uptick in threats against Germany by al Qaeda and other Islamist groups since the beginning of the year.

In his nearly 26-minute video statement, a man identified as Bekay Harrach, using the pseudonym Abu Talha and speaking in German, says that, if the September 27 elections vote into power parties that do not pledge to pull German troops from Afghanistan, there will be a "rude awakening."

The speaker calls on Muslims in Germany to stay away from public life during the first two weeks after the elections, implying that any attacks would take place then.

The speaker repeatedly criticizes German Chancellor Angela Merkel and her support of the wars in Iraq and Afghanistan.

He also criticizes Merkel's rivals, the Social Democrats, but extended a "peace offer," stating, "If the German people vote for peace, then the Mujahedeen will choose peace with Germany as well. And with the withdrawal of the last German soldier from Afghanistan, the last Mujahed will also leave Germany. Al Qaeda gives you their word."

The speaker concludes by saying that it is up to the people of Germany to decide their fate: "In a democracy, only the people can order their soldiers to come home. But if the German people decide to continue this war, then it has sealed its own fate and, on top of that, it will have demonstrated that in a democracy civilians are not innocent after all."

He promises the city of Kiel will remain safe.

Friday's statement was Abu Talha's third since January of this year.

All About Al Qaeda • Germany