ROME, Italy (CNN) -- The Vatican said Tuesday it has worked out a way for groups of Anglicans who are dissatisfied with their faith to join the Catholic Church. 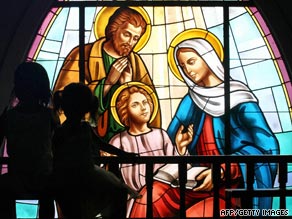 The Vatican says more Anglicans have expressed an interest in joining the Catholic Church.

The parishes would be led by former Anglican clergy -- including those who are married -- who would be ordained as Catholic priests, said the Rev. James Massa, ecumenical director of the United States Conference of Catholic Bishops.

"This sets up a process for whole groups of Anglicans -- clergy and laity -- to enter in to the Catholic Church while retaining their forms of worship and other Anglican traditions," Massa said.

The number of Anglicans wishing to join the Catholic Church has increased in recent years as the Anglican Church has welcomed the ordination of women and openly gay clergy and blessed homosexual partnerships, said Cardinal William Joseph Levada, the head of the Vatican's Congregation for the Doctrine of the Faith.

Their talks with the Vatican recently began speeding up, Vatican officials said, leading to Tuesday's announcement.

"The Catholic Church is responding to the many requests that have been submitted to the Holy See from groups of Anglican clergy and faithful in different parts of the world who wish to enter into full visible communion," Levada said.

Levada said "hundreds" of Anglicans around the world have expressed their desire to join the Catholic Church. Among them are 50 Anglican bishops, said Archbishop Joseph Augustine Di Noia of the Congregation for Divine Worship.

"We've been praying for this unity for 40 years and we've not anticipated it happening now," Di Noia said. "The Holy Spirit is at work here."

One interested group is the Traditional Anglican Communion, an association of churches that is separate from the Anglican Communion and has hundreds of thousands of members worldwide. The TAC in 2007 petitioned the Vatican for unity with the Catholic Church with the stipulation that the group retain its Anglican rites.

The TAC's primate, Archbishop John Hepworth of Australia, said in a statement Tuesday that the Vatican's announcement "more than matches the dreams we dared to include in our petition two years ago."

That is because the Vatican's move involves not only the TAC but other Anglican groups that want to unite with the Catholic Church, said the Right Rev. Daren K. Williams, bishop ordinary of the western diocese of the Anglican Church of America, which is part of the TAC.

The Vatican has yet to release all details of the offer, and the TAC's leaders will meet and discuss how to respond when it does, Williams said. But Williams said he believes much of TAC will respond favorably.

Williams, who also is rector of All Saints Anglican Church in Fountain Valley, California, said his parishioners have generally been "very warmly receiving" Tuesday's announcement.

"It is encouraging for them to know their worship experience wouldn't be turned upside down by the Roman Catholic Church," Williams said. "The person in the pew should see very little difference in the way we pray. We might be asked to pray aloud for any pope who happens to be in office, in addition to praying for our primate.

The parishes retaining the Anglican rites would answer not to Catholic bishops but to regional or nationwide "personal ordinariates" who would report to the pope, Massa said. Those officials often will be former Anglican clergy, Vatican officials said.

The Church of England said the move ends a "period of uncertainty" for Anglican groups who wanted more unity with the Catholic Church.

Both groups have a "substantial overlap in faith, doctrine and spirituality" and will continue to hold official dialogues, the archbishops of Canterbury and Westminster said in a joint statement.

"Those Anglicans who have approached the Holy See have made clear their desire for full, visible unity in the one, holy, catholic and apostolic church," Levada said. "At the same time, they have told us of the importance of their Anglican traditions of spirituality and worship for their faith journey."

Preserving Anglican traditions, such as mass rites, adds to the diversity of the Catholic Church, he said.

"The unity of the church does not require a uniformity that ignores cultural diversity, as the history of Christianity shows," he said. "Moreover, the many diverse traditions present in the Catholic Church today are all rooted in the principle articulated by St. Paul in his letter to the Ephesians: 'There is one Lord, one faith, one baptism.' "

CNN's Hada Messia and Jason Hanna contributed to this report.

All About The Roman Catholic Church