'I am not a Nazi,' National Party leader says on BBC

LONDON, England (CNN) -- British National Party leader Nicholas Griffin denied Thursday in a controversial appearance on a popular BBC television program that he is a Nazi. 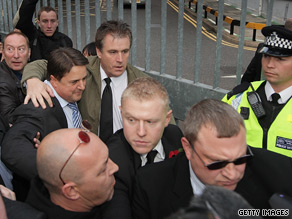 BNP leader Nick Griffin is surrounded by his bodyguards as he arrives at BBC TV studios.

"I am not a Nazi, I never have been," the far-right political leader said on "Question Time" after describing himself as the son of a member of the Royal Air Force who fought during World War II.

He said the father of Labour Party leader Jack Straw, who also appeared on the program, had spent the war years "in prison for refusing to fight Adolf Hitler."

Griffin's comments came after Straw had drawn parallels between the BNP and the Nazi Party, which he described as "a party and an ideology based on race, just like another party represented here today."

But Griffin rejected the comparison. "I am the most loathed man in Britain in the eyes of Britain's Nazis," he said.

"There are Nazis in Britain and they loathe me because I have brought the British National Party from being, frankly, an anti-Semitic and racist organization into being the only political party which, in the clashes between Israel and Gaza, stood full-square behind Israel's right to deal with Hamas terrorists."

"The vast majority of this audience find what you stand for to be completely disgusting," said one audience member to applause.

Other political parties "have a moral compass," Straw said. "Nazism doesn't and neither, I am afraid, does the constitution of the BNP."

"We only won the First World War and the Second World War because we were joined by millions of black and Asian people from around the world," he said to sustained applause.

Griffin denied that his party was racist, insisting it supported "indigenous people" without regard to the color their skin.

Challenged to explain his description of Islam as a "wicked religion," Griffin said it did not support free speech or equal rights for women.

"If Muslims do stay in this country, it must be on the understanding that it must remain fundamentally a British and Christian country," he said, saying he sought a "truce with Islam."

Griffin's appearance came after about 500 demonstrators and police engaged in some shoving outside the gates of BBC Television Centre, and pictures broadcast on the BBC showed at least two of the protesters being dragged bodily from the building.

One protester at the demonstration outside the BBC was Philip McCiowen, 54, from Hertfordshire, north of London.

"Hitler started like this and in a small way Nick Griffin is trying to blame the Asians, Muslims and blacks. It's exactly the same as in 1933 and he shouldn't be allowed on television," "McCiowen told the Press Association.

But most users of CNN's Connect The World forum backed the BBC's decision to invite Griffin on "Question Time." Should far-right leader have TV platform? Send us your comments

"I applaud the BBC for actually taking this stance and allowing the British public to make up its own mind on the BNP," wrote one user, Iain Rawlins. "To assume we are all going to be brainwashed by what Nick Griffin will have to say is tantamount to lunacy.

"Hopefully enough, the 'Question Time' program will have given him this platform to publicly hang himself with his words and the hate that lies behind them. I applaud the BBC for actually taking this stance and allowing the British public to make up its own mind on the BNP."

Griffin was elected leader of the BNP in the late 1990s, not long after being convicted of inciting racial hatred relating to material denying the Holocaust.

He was cleared of race hate offenses in 2006 after the BBC secretly filmed him telling a crowd that Islam was a "wicked, vicious faith." He campaigns against immigration and asks on his Web site: "Have you had enough of being called a 'racist' because you are proud to be British?"

Only last week, the party agreed to consider letting non-white members join the party after a court challenge instigated by the Equality and Human Rights Commission. Read the story

The BNP won two seats in the European Parliamentary elections in the summer, the first time it had ever won seats in Strasbourg, France. As an elected MEP Griffin became qualified to appear on "Question Time," the BBC said.

Of his appearance on the show, Griffin said in a message to members that "this could be THE key moment that propels the BNP into the big time."

Staunch critics of Griffin and the British National Party fear he could be right.

Government minister Peter Hain said that by making the "extraordinary" decision to allow Griffin to speak, the "BBC will be showcasing the BNP on a panel alongside the mainstream parties as an equally legitimate, respectable, democratic political party, when it is nothing of the kind."

The BBC has defended its decision to provide a national platform for the far-right leader.

Writing in the Guardian newspaper, BBC Director-General Mark Thompson said: "The case against inviting the BNP to appear on Question Time is a case for censorship."

Thompson said the government should ban the BNP from the airwaves if it felt Griffin should not be allowed to take part. But Prime Minister Gordon Brown said it was a matter for the BBC and he did not want to interfere with it.

Parallels have been drawn between Griffin's appearance on Britain's most-watched political program, and Jean-Marie Le Pen's debut on L'Heure de Vérité (The Hour of Truth), a similar show on French television in the 1980s.

Le Pen, founder and leader of the Front National (National Front) Party, credited the television appearance with taking him from the political wilderness to prominence on the political stage.

If traffic to the British National Party Web site is anything to go by, the outcry over Griffin's appearance has already boosted interest, or at the very least, curiosity about the party.

A temporary site has been erected with a message: "We have had to take our normal Web site offline due to the enormous amount of ordinary people, just like you, visiting our Web site."