(CNN) -- Former Bosnian Serb leader Radovan Karadzic intends to skip the start of his war crimes trial because he says he has had too little time to prepare, a spokeswoman for the International Criminal Tribunal for the former Yugoslavia said Thursday. 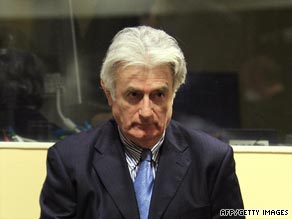 Radovan Karadzic wrote to the court to say he would not attend the trial.

The trial is still expected to begin on Monday despite Karadzic's intended absence, which he announced in a letter to the court, the spokeswoman said.

"The tribunal judges control court proceedings. They are the only relevant body that can make a decision about the readiness of the case for trial," she said.

Karadzic, who is defending himself, faces genocide charges and nine other counts of war crimes and crimes against humanity against Bosnian Muslims, Bosnian Croats and other non-Serbian civilians during the brutal and bloody dissolution of Yugoslavia in the 1990s.

The conflict introduced the phrase "ethnic cleansing" into the lexicon describing war crimes, as different factions in multi-ethnic Yugoslavia sought to kill or drive out other groups.

Karadzic was arrested last year after more than a decade on the run and was found to have been living in Belgrade, the capital of Serbia, and practicing alternative medicine in disguise.

In a letter dated Wednesday and made public Thursday, Karadzic complains that he has not been given the relevant case material on time -- and he says the volume of material would have been too much to go through even if he had received it promptly.

Karadzic says he should not be penalized for representing himself.

"No lawyer in this world could prepare defense within this period of time," he writes. "I hereby inform you that my defense is not ready for my trial that is supposed to begin as scheduled, on the 26th of October, and that therefore I shall not appear before you on that date."

He promised to continue his preparations in "the most intensive way" and inform the court when he is ready.

The genocide charges against him stem partly from the most notorious massacre of the war in Bosnia and Herzegovina, once a part of Yugoslavia.

More than 7,000 Bosnian Muslim men and boys were killed at Srebrenica when ethnic Serb troops overran a U.N. "safe area" in July 1995. It was the worst European massacre since World War II.

Prosecutors at the U.N. war crimes tribunal in The Hague accuse Karadzic of responsibility.

"On 8 March 1995, Karadzic instructed Bosnian Serb forces under his command to create an unbearable situation of total insecurity with no hope of further survival for the inhabitants of Srebrenica, amongst other places," the tribunal said in a statement this month.

The Hague indictment also says Karadzic committed genocide when forces under his command killed non-Serbs during and after attacks in more than a dozen Bosnian municipalities in the early stages of the war.

Karadzic, who faces life in prison if he is convicted, denies the charges. The court cannot impose the death penalty.

When he was arrested in July 2008, Karadzic had grown a large white beard and let his famous steel-gray hair grow long and turn white. He had spent more than 13 years in hiding, during which he practiced alternative medicine at a Belgrade clinic.

Prosecutor Alan Tieger told the court in July that the case against Karadzic would take approximately 490 hours. That means prosecutors are likely to need more than a year to lay out their evidence, a court spokeswoman said.

The 1992-95 Bosnian war was the longest of the wars spawned by the breakup of Yugoslavia in the early 1990s. Backed by the government of then-Yugoslav President Slobodan Milosevic, Bosnian Serb forces seized control of more than half the country and launched a campaign against the Muslim and Croat populations.

Karadzic was removed from power in 1995, when the Dayton Accords that ended the Bosnian war barred anyone accused of war crimes from holding office.