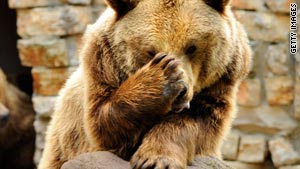 Moscow, Russia (CNN) -- A bear on ice skates attacked two people during rehearsals at a circus in Bishkek, the capital of Kyrgyzstan, killing one of them, Kyrgyz officials said Friday.

In the incident, which happened Thursday, the 5-year-old animal killed the circus administrator, Dmitry Potapov, and mauled an animal trainer, who was attempting to rescue him.

"The incident occurred during a rehearsal by the Russian state circus company troupe which was performing in Bishkek with the program, Bears on Ice," Ministry of Culture and Information director Kurmangazy Isanayev told reporters.

It is unclear what caused the bear to attack Potapov, 25, nearly severing one of his legs while dragging him across the ice by his neck. Medical personnel were unable to save Potapov, who died at the scene.

The 29-year-old circus trainer Yevgeny Popov, who attempted to rescue Potapov, was also severely injured, according to doctors.

After the incident, the circus was cordoned off by police and emergency service workers. Experts have been brought in to examine the bear, which was shot and died at the scene.

Russia has a long-standing tradition of training bears to perform tricks such as riding motorcycles, ice skating, and playing hockey. Fatal attacks are unusual.