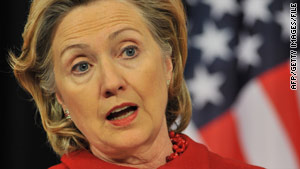 (CNN) -- U.N. Secretary-General Ban Ki-moon on Tuesday urged both industrialized and developing countries to do more during this week's Copenhagen summit toward reaching an agreement on limiting carbon emissions.

With world leaders gathering in hopes of forging a deal to reduce the emissions blamed for increasing global temperatures, Ban told reporters that "Nature does not negotiate with us."

"We have a chance -- a real chance, here and now -- to change the course of our history," he said. But both industrialized and developing countries "can and they must do more."

The divide between rich and poor countries is one of the key fissures at the U.N. climate change conference that is nearing a climax in Denmark. Developing countries object to restrictions which they fear would keep them from following the same path to prosperity that the United States and other industrialized nations took, while developed countries are wary of taking steps that would hinder their own economies.

Representatives of more than 100 developing nations walked out on the climate summit Monday to protesting what they called inadequate offers of aid from richer countries. Island states in particular, which are more vulnerable to rising sea levels, are pushing for limits that would reduce carbon emissions enough to limit the expected rise in average global temperatures to 1.5 degrees Celsius (2.7 degrees Fahrenheit).

John Holmes, the U.N. undersecretary-general for humanitarian affairs, said the impacts of climate change are more likely to be felt by developing countries.

"This is something that's happening now," he said. "Climate change has a human face, and that face is represented in part by the most vulnerable and poorest people in the world."

The so-called "High Level Segment" of the conference, in which world leaders sit down in an attempt to hash out a final agreement, begins on Wednesday evening. Yvo de Boer, executive secretary of the U.N. Framework Convention on Climate Change, told reporters Tuesday that "nowhere near enough progress" had been made towards a deal.

But Danish Prime Minister Lars Lokke Rasmussen, the summit's host, said he remained confident an accord could be struck by week's end if governments were "ambitious."

"We can do this by Friday," he said. "I've chosen to be optimistic about that."

U.S. Secretary of State Hillary Clinton said Tuesday that Washington is ready to do its part to reduce greenhouse-gas emissions, but other countries must play their part as well.

"Nearly all of the growth in emissions in the next 20 years will come from the developing world," Clinton wrote in an opinion piece for the International Herald Tribune. "Without their participation and commitment, a solution is impossible."