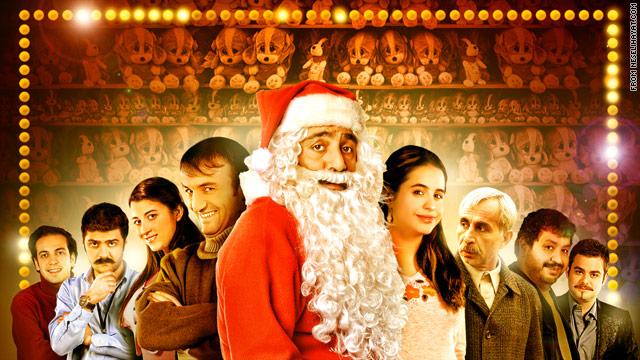 The Santa in 'A Cheerful Life' starts off not knowing how or why to "ho, ho, ho."
STORY HIGHLIGHTS

ISTANBUL, Turkey (CNN) -- It may be the first modern Christmas movie ever made for audiences in Turkey, a mostly Muslim country that does not celebrate Christmas.

"Neseli Hayat" or "A Cheerful Life" is the story of a down-on-his-luck, working class Turk who is hired to work as a mall Santa.

The trouble is he doesn't really know who Santa Claus is, and needs some very basic lessons.

In one scene, a manager drills the main character, Riza and several other hired Santas on how to give Saint Nick's hearty bellow, "ho-ho-ho."

In another segment, a bearded, costumed Riza enters a waiting room and extends the traditional Muslim greeting "A salam aleyekum" to four other mall Santas, who answer back without looking up "aleyekum salam."

But Riza then spends much of the film, embarrassed and hiding his job and costume at a posh Istanbul mall glittering with holiday decorations, from his wife and family in a shanty neighborhood where one would be hard pressed to find a single piece of tinsel.

The writer, director and actor who played Riza, Yilmaz Erdogan, says his character is a metaphorical bridge between two worlds in Turkey: wealthier, upper class Turks who live a "Western" lifestyle and have adopted the trappings of Christmas to celebrate the new year, and poorer Turks who have emigrated from the Anatolian heartland to the big city and are more familiar with traditionally "Middle Eastern" customs.

"Riza is the man who is in the middle of these two groups," Erdogan said.

He spoke to CNN at the Istanbul premiere of his film, which debuted in a shopping mall cinema decorated with Christmas trees and female hostesses wearing tight black dresses and Santa hats.

Erdogan agreed it was an unusual decision to focus a Turkish film on Santa Claus, which Turks often refer to as "Noel Baba" [Father Christmas].

"It is a symbol that we all love. Any person who sees him will smile," Erdogan said.

"We don't have a religious relationship with [Christmas]. We have a relationship based on a date, based on modern times. A significant group of us love this Western date and we celebrate it with the ones that we love," he added.

This month, one could easily mistake the shopping malls and commercial districts of Istanbul for any Western, Christian city. Stores and hotels are bursting with Christmas trees, lights and ornaments. Only the sound of Christmas carols is perhaps missing.

And the Yuletide pageantry is not only confined to shopping destinations of the wealthy.

"Its been busy these days," said shopkeeper Saime Elkatmis, who wore a woman's Muslim headscarf as she sold plastic wreaths and glowing stars to passing customers.

"Within the last two or three years, people are a lot more interested in New Year holiday, from all the sectors of society," she added.

"A Cheerful Life" creator Yilmaz Erdogan agrees that Santa is a symbol of capitalism.

"This is capitalism and Riza is a victim," Erdogan said. In the film, Riza resorts to working as a mall Santa after an economic crisis drives his restaurant bankrupt, and after he plunges himself and his friends in debt by falling for a pyramid scam.

But in the end, with the help of the Santa suit and some very strong Turkish family values, Riza succeeds in saving the day.

The split identity between east and west is often a source of social and political tension in Turkey. This gentle, Turkish Christmas movie shows Turks they can have a foot in both worlds and still enjoy the holidays.