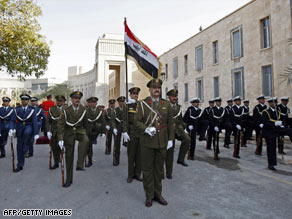 An Iraqi honor guard parades outside the former palace of Saddam Hussein in Baghdad on Thursday.

Iraqi troops took over checkpoints around the heavily protected district, formally known as the International Zone, which houses Iraqi government offices and the U.S. Embassy.

Saddam Hussein's Republican Palace, which served as U.S. headquarters in Baghdad after the 2003 invasion that ousted Iraq's longtime strongman, was among the facilities handed over in Thursday's ceremony.

"This day is a great day in the history of the Iraqi people," Iraqi military spokesman Maj. Gen. Qassim Atta said.

Watch what goes on in the "Green Zone" »

"The palace was handed back to the Iraqi people, significant as symbol of the head of the government and a sign for increased sovereignty," he said at a news conference with Atta.

Thursday marked the first day of a U.S.-Iraqi pact that allows U.S. forces to remain in the country until 2011, under tighter restrictions. Similar agreements have been signed with other coalition countries that remain in Iraq. A U.N. mandate that authorized international forces in the country expired Wednesday.

Perkins said American troops will continue to fight alongside Iraqis -- "but the Iraqis will be in the lead."

"When you come up to a checkpoint, the Iraqis will check your identification. They will make the decision if you come in or go out," he said.

"We will continue to be there to provide some technical capacity, to provide some mentoring, but you will see less and less American forces and more and more Iraqi forces -- and they will have the majority of the responsibility for making those key decisions which determine the security of the capital."

Iraq's three-member Presidency Council ratified the new pact in December. Under the deal, U.S. troops will withdraw from Iraqi cities and towns by June 30, and all American troops will leave the country by the end of 2011, more than eight years after the U.S.-led invasion that toppled Hussein.

The agreement authorizes the "temporary assistance" of U.S. forces but severely restricts their role. It requires Iraqi approval for all military operations and gives Iraqi courts the right to try U.S. troops and contractors for "grave premeditated felonies."