SDEROT, Israel -- Mohammed Abu Hassanin may be a young boy, but he's old enough to know he's scared of the attacks being launched by Israel in Gaza. 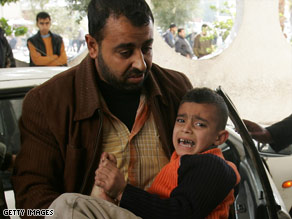 A wounded boy is carried into the Al-Shifa hospital on Monday in Gaza.

"When the Jews bomb us when we are asleep, [Hassanin] says 'We get scared,' " a translator says.

Hassanin is one boy from Gaza speaking frankly to an anchor on Hamas TV about the attacks, which have gone on for 10 days.

Children like him have accounted for one-third of the casualties at Gaza's main hospital, foreign doctors say. And now Hamas and their media are making them the face of the attacks.

The children have seen terrible images of tragedy: their friends injured or killed and bloodied bodies in the streets.

They are images Hassanin says he will never forget. He'll keep them stored away until he's old enough to do something about it.

"When we will grow up, we will bomb them back," a CNN translator quoted the boy saying on Hamas TV.

It's a sentiment psychiatrists in Gaza say could be responsible a frightening future --­ that the violence children are witnessing will sow the seeds for future violence.

Watch how Arab media is covering the crisis »

In Gaza, a little girl wails as she talks about her friend who was killed in an attack on a Hamas house.

"She could be my sister," the girl tearfully says. "She is my friend but maybe my sister could die some day, I don't know. I am afraid."

"Today children are experiencing a serious kind of trauma, and I fear for the future," el Sarraj said. "The children of the first intifada were throwing stones at the Israeli troops. And because of the trauma they were subjected to, 10 years later, the same children became suicide bombers."

Nowhere is safe for the children, and many are without food.

On Sunday, Save the Children staff members delivered food parcels to 641 families -- or nearly 6,000 people, including more than 3,000 children -- in Gaza City, east Jabalyah, Beit Lahia, Beit Hanoun and Um Al Nasser. But the group said the continuous air assaults and ground fighting are making movement dangerous for needy families.

"The situation has reached a critical level for children who are exposed to and experiencing violence, fear and uncertainty," said Annie Foster, Save the Children's team leader for the emergency response in the region.

"Parents are facing enormous challenges to protecting and caring for their children. Either they cannot leave their house to attend to basic needs for fear of being caught in the crossfire -- or they are being forced from their homes, into harm's way, to find shelter."

In the streets of Gaza, where Israeli ground forces are operating, and on the Israeli side, where Hamas rockets are being launched, the streets are empty. Even playgrounds for children are equipped with bunkers.

Sirens wail on the Israeli side warning of Hamas rocket attacks. When asked what they think when they hear the sound, the children respond with only one word: "Fear."

The threat of Hamas rockets in the south of Israel is taken so seriously that almost all the schools within rocket range of Gaza have locked their gates and told children not to come to school. According to the Israeli government, 300,000 students are affected.

The threat to children is something, perhaps the only thing, that people on both sides of the border agree on.

Gaby Schrieber, an Israeli psychiatrist at Barzilai Hospital, says Israeli children get excellent help and structured support ­ -- something he fears children in Gaza won't be receiving.

And if they don't get the support they need or hope for a better future, Schrieber worries what will happen to them.

"Where is hope for them, and how can they structure their future in their minds?" Schrieber said. "They can become extremists."

All About Hamas • Gaza City • Israel