Commentary: Both sides wrong in Gaza 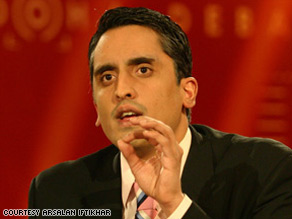 Arsalan Iftikhar says both sides in the Gaza conflict have committed acts tantamount to "war crimes."

WASHINGTON (CNN) -- The recent carnage in Gaza has left little doubt that within the tortured dynamic of the Israeli-Palestinian conflict, both the chicken and the egg have completely and utterly lost their minds.

Regardless of who's to blame for the origins of the conflict, shame on both Hamas and Israel for their recent violations of international law that have led to a humanitarian inferno in Gaza and southern Israel.

Hamas is to be blamed for its sophomoric provocation of its neighbor's military wrath by firing missiles into southern Israel. Israel also should be condemned for its disproportionately inhumane onslaught in Gaza, which has currently left 555 people dead and 2,750 injured, according to Palestinian medical sources cited by CNN. The United Nations estimates that at least 25 percent of Palestinians killed have been civilians.

Simply put, both sides have committed acts tantamount to "war crimes," and both continue to violate international law repeatedly in this nightmare.

Under international law, the Geneva Conventions prohibit armed reprisals that intentionally inflict "collective punishment" against civilian populations as well as the targeting of nonmilitary targets.

Both Israel (with its military onslaught in Gaza) and Hamas (with its primitive rocket-firing into southern Israel) violate Article 33 of the Fourth Geneva Conventions, which states: "No protected person may be punished for an offense he or she has not personally committed. Collective penalties and likewise all measures of intimidation or of terrorism are prohibited."

Further, the legal doctrine of "proportionality" originated in the 1907 Hague Conventions where, according to Lionel Beehner, writing for the Council of Foreign Relations, "a state is legally allowed to unilaterally defend itself and right a wrong provided the response is proportional to the injury suffered. The response must also be immediate and necessary, refrain from targeting civilians and require only enough force to reinstate the status quo ante."

Israeli columnist Gideon Levy bravely tackled the "proportionality" debate recently in Israel's Haaretz newspaper by writing: "Once again, Israel's violent responses, even if there is justification for them, exceed all proportion and cross every red line of humaneness, morality, international law and wisdom. ... What began in Gaza is a war crime and the foolishness of a country."

Levy later cogently added, "In its foolishness, Hamas brought this on itself and on its people, but this does not excuse Israel's overreaction."

Similarly, Hamas cannot be forgiven for its part in causing the humanitarian crisis in Gaza. Condemning Israel's military onslaught in Gaza cannot be done with any intellectual honesty without equally condemning the reprehensible provocation by Hamas.

Hamas was described in The Guardian by Ed Husain as an "irresponsible, senile and fanatical organisation that repeatedly puts its people at risk." Its foolishness was borne out recently when, as the Arab newspaper Al-Hayat said, it was "clear that Hamas was surprised by the magnitude of the [Israeli] response, as it did not take the Israeli threats seriously."

This catastrophic strategic blunder should bring utter shame upon the house of Hamas for needlessly picking a fight with "the neighborhood bully" (Levy's reference to Israel in his Haaretz column) and having the blood of innocent Palestinian women and children flow like water through Gaza as a direct byproduct of Hamas' own political stupidity.

Let it be shouted from the rooftops of the world: There is no military solution to the Israeli-Palestinian conflict.

Regardless of perpetual finger-pointing and one-sided condemnations from both sides, hundreds of millions worldwide condemn both sides of the current siege.

France's Foreign Ministry recently captured this humanistic global zeitgeist when it issued a joint condemnation of both sides: "France condemns the Israeli ground offensive against Gaza as it condemns the continuation of rocket firing [by Hamas]."

Simply put, an Israeli life is equal to a Palestinian life (and vice versa). Politics be damned; basic human decency dictates that both sides of this conflict must be condemned for their respective human rights violations.

As Britain and the European Union have already done, it is high time for a resounding international call for an immediate cease-fire. Afterward, the chicken and egg can go back to their pathological political "blame game" without more innocent civilian blood flowing through the streets.

The land surrounding Jerusalem is a shared holy land for all three Abrahamic faiths. In an area where David ruled, Jesus taught and Mohammed ascended to heaven, all three of them would collectively shed a tear today at the mere sight of the unholy carnage that has engulfed a region meant to bring humanity closer to the Divine.

All wars are crimes, in my view. With two wrongs never making a right, if this nonsensical murderous tit-for-tat continues unchallenged, it will be both Palestinian and Israeli children who will continue to pay the ultimate price for the criminal acts of their elected leaderships.

Until this cyclical dilemma of civilian murder on both sides ends, we will be left haunted with these visionary words of Mahatma Gandhi:

"An eye for an eye leaves the whole world blind."

All About Israel • Hamas • Jerusalem