(CNN) -- Israel was founded on democratic principles with the Jewish state's declaration of independence in 1948 including a commitment to the "complete equality of social and political rights to all its inhabitants irrespective of religion, race or sex." It has remained a continuous democracy ever since. 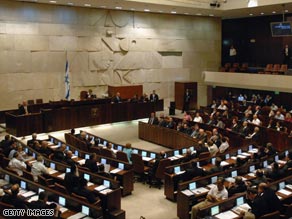 The 120-seat Knesset is the Israeli seat of government.

The seat of Israeli government is the Knesset, the country's national parliament, located in Jerusalem, which Israel claims as its capital. The Knesset's 120 lawmakers are elected by universal suffrage with all Israeli citizens over the age of 18 entitled to vote.

Knesset seats are divided according to each party's proportion of the overall vote. But parties must poll at least two percent nationally to gain a seat.

Participation in elections, including among Arab Israelis who constitute around 20 percent of the population, has traditionally been high at around 80 percent turnout, according to Israeli government figures. Israel currently has around 5.3 million eligible voters.

Israel usually holds national elections every four years. But this year's poll on February 10 was called early -- less than three years since the last vote -- by Israeli President Shimon Peres following the resignation of prime minister Ehud Olmert amid allegations of corruption and his Kadima Party successor Tzipi Livni's failure to form a coalition. Olmert has continued to serve as caretaker prime minister in the interim.

The Knesset by party

Coalitions of two or more parties are common in Israel; in fact no party has ever won enough votes to form a government by itself. Those remaining outside the ruling coalition make up the opposition.

Thirty-four parties will participate in the 2009 elections, including major parties such as Kadima, Likud and Labor and also three Arab parties.

The task of forming and leading a government is charged by Israel's president to the Knesset member and party leader considered to have the best chance of forming a viable coalition.

The prime minister-designate then has 28 days, extendable by 14 days, to build a coalition commanding the support of at least 61 Knesset members.

Officials results are due to be published on February 18 with the new Knesset convening on March 2.