WASHINGTON (CNN) -- Iranian scientists have reached "nuclear weapons breakout capability," according to a new report based on findings of the U.N. nuclear watchdog agency. 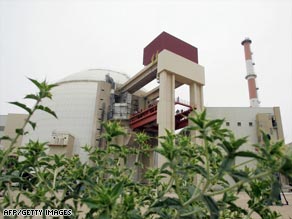 A building housing the reactor at the Bushehr nuclear power plant in the Iranian port town of Bushehr.

The Institute for Science and International Security report concludes Iran does not yet have a nuclear weapon but does have enough low-enriched uranium for a single nuclear weapon.

But an official at the International Atomic Energy Agency cautioned about drawing such conclusions. The IAEA says Iran's stock of low-enriched uranium would have to be turned into highly enriched uranium to be weapons-grade material.

Watch how Iran has defended its nuclear program »

The institute drew its conclusions from an IAEA report dated February 19, 2009. An official in the IAEA confirmed the authenticity of the report for CNN, but didn't want to be named.

The IAEA report is posted on the Web site of ISIS, a Washington-based non-profit and non-partisan institution focused on stopping the spread of nuclear weapons.

It also finds that while Iran has dramatically increased installation of centrifuges that can be used for enriching uranium -- from 4,000 to 5,400 -- its scientists aren't using the new units yet. They remain in "research and development mode."

In the IAEA report, the agency also says no substantive progress has been made in resolving issues about possible "military dimensions" to Iran's nuclear program.

Iran has consistently denied the weapons allegations, calling them "baseless" and "fabricated."

Iran says its nuclear program is necessary to provide civilian energy for the country, but other countries have voiced concern that its true purpose is to produce nuclear weapons.