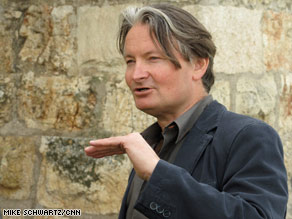 Shimon Gibson, outside the Old City of Jerusalem, believes he has found the site of Jesus' trial.

But they're all taking the wrong route, according to Israeli archaeologist Shimon Gibson. In a new book, titled "The Final Days of Jesus," Gibson says he has found the location of Jesus' trial, where Pontius Pilate, the Roman governor, condemned him to death by crucifixion.

Traditionally it is believed that the trial took place at the Antonia Fortress, outside the Temple Mount, near Lion's Gate. But Gibson believes the trial was actually conducted in an area just outside what is now the western wall of the Old City.

"You have a courtyard and a pavement and a rocky outcrop on one side," he says of the site.

"In the Gospel of John, you have a description of the trial taking place at the Lithostratus, Greek for pavement, at a place called Gabata, which is the word for an ancient hillock or a rocky outcrop, and this is what we have here."

So if the trial was outside the Old City, as Gibson believes, and not in the Antonia Fortress, then the traditional Via Dolorosa, the route Jesus took to his crucifixion, is wrong.

I retraced with Gibson the route of his new Via Dolorosa, which begins in a nondescript parking lot in the Armenian Quarter. It skirts the Ottoman walls of the Old City, next to what is known as the Tower of David near Jaffa Gate, then heads toward the Church of the Holy Sepulcher.

As we walked, it occurred to me that all the shops that have made a living for generations because of their proximity to the Via Dolorosa might suffer if Gibson's theory catches on. But his findings don't dispute the basis for Christian faith, just the generally accepted geography of critical chapters of the New Testament.

Gibson blames the Crusaders, who conquered Jerusalem in 1099, for the confusion.

"When they conquered the city, they effectively turned it into a ghost town," he says.

"They slaughtered the Muslims, the Jews and the local Christians, and as a result there was a shifting of tradition ... from one side of the city to another."

Munib Younan, Bishop of the Evangelical Lutheran Church in Jordan and the Holy Land, does not reject Gibson's ideas outright, but insists that tradition cannot be brushed aside.

"I respect all of the archaeological excavations, but at the same time I have to follow what our forefathers and foremothers taught us," says the energetic but soft-spoken man in his late 50s, standing outside the Austrian Hospice in the Old City, which is on what most people know as the Via Dolorosa.

Surveying the street around him, full of Muslims, Christians and Jews, he says, "For me, the Via Dolorosa is this one."

I've been based in Jerusalem for three years and have seen plenty of new theories about various aspects of Biblical accounts come and go. While I do believe Gibson's account makes sense, I also know that when it comes to faith, tradition is a powerful glue that holds religion together.

And I suspect that the crowds of faithful walking through the Old City this Good Friday will most likely cleave to tradition and ignore the latest theory.

All About Jerusalem • Christianity • Jesus Christ