TEHRAN, Iran (CNN) -- The head of Iran's judiciary Monday ordered a "careful and speedy appeal process" for an Iranian-American journalist who was convicted of spying, Iran's state-run news agency reported. 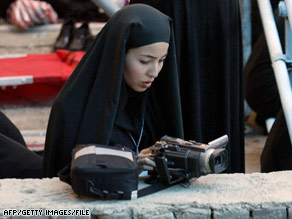 Journalist Roxana Saberi, shown working in Iran in 2004, is accused of spying in the country.

Roxana Saberi, 31, was sentenced Saturday to eight years in prison after a one-day trial that was closed to the public.

The decision prompted sharp denunciations from President Obama, as well as other U.S. and international officials. Saberi's lawyer has said he would appeal Saturday's verdict.

Judiciary Chief Ayatollah Hashemi Shahroudi's order calls on the head of Tehran's Justice Department, Alireza Avayee, to make sure the appeals process is quick and fair.

An Iranian Foreign Ministry spokesman on Monday denied that Saberi's arrest had anything to do with the country's efforts to secure the release of several Iranians held by U.S. forces in Iraq, according to Iran's IRNA news agency.

During a January 2007 raid in the Iraqi city of Irbil, U.S. troops arrested five Iranians accused of being members of an elite Iranian military unit. They were accused of supporting Shiite militias in Iraq, but Iran said they were diplomats and has accused the United States of violating international law by raiding a consulate.

Foreign Ministry spokesman Hassan Qashqavi also said Saberi has the right to appeal the verdict, according to IRNA.

Obama on Sunday called for Saberi's release, saying he is "gravely concerned with her safety and well-being."

"We are working to make sure that she is properly treated and to get more information about the disposition of her case," Obama said. "She is an American citizen, and I have complete confidence that she was not engaging in any sort of espionage."

Iranian officials initially said Saberi was held for buying a bottle of wine. The Foreign Ministry later said she was detained for reporting without proper accreditation.

Saberi, who comes from North Dakota, has been living in Iran since 2003, said the Committee to Protect Journalists, a journalists' advocacy group.

Saberi was detained in January, although no formal charges were disclosed. On April 9, word emerged that Saberi had been charged with espionage.

Authorities also said Saberi confessed to the charges. Her father said he believes she was coerced into making damaging statements.

Watch as Saberi's dad says she was duped »