(CNN) -- Shortly after 8 a.m. on July 12, 2006, Hezbollah fighters snatched two Israeli soldiers after carrying out an ambush on their patrol. 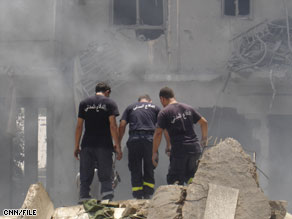 Emergency workers at a destroyed building in Tyre, Lebanon, during the 2006 war

What followed was a bloody 34-day fight -- centered in southern Lebanon and the southern suburbs of Beirut, which were pounded by Israel, and Northern Israel -- which was hit by an onslaught of Hezbollah rockets.

Now, it seems, all the pieces are slowly falling into place for a yet another war between Israel and Hezbollah.

Hezbollah, poised for a potential election victory on June 7, is ratcheting up the rhetoric toward Israel. Hassan Nasrallah, the secretary general of Hezbollah, has been giving regular speeches against Israel.

Even the release of an article by the German magazine "Der Spiegel," in which unnamed officials from the Hague said there is clear evidence that Hezbollah was responsible for the assassination of former Lebanese Prime Minister Rafik Hariri, only seems to have upped the ante.

"What Der Spiegel wrote about our involvement in the Hariri assassination is nothing but an Israeli accusation, and we will deal with it on that basis," Nasrallah said Monday night, calling the article a "conspiracy" timed for the pending elections.

Avigdor Lieberman, Israel's new foreign minister, seized on the release of the article.

"If this is the conclusion of the investigators, an international arrest warrant should be issued immediately for Nasrallah," he said. "He must be brought before an international court of law."

Putting aside the fact that Nasrallah rarely appears in public -- making an arrest highly unlikely -- the rhetoric has clearly begun again on both sides.

For decades now, even when Hezbollah and Israel are not engaged in all-out war, they seem to always be sparring. On multiple occasions, anti-aircraft batteries in southern Lebanon have fired at Israeli jets running reconnaissance missions.

It's important information for Israel Defense Forces to have. It is estimated that Hezbollah now possesses up to 30,000 rockets. Nasrallah has said as much, and has indicated that the rockets now have the range to reach Tel Aviv.

All of these developments come in the early days of Israeli Prime Minister Benjamin Netanyahu's new government. The campaign centered around attacking the former Prime Minister Ehud Barak's policies toward Lebanon.

During the campaign, Netanyahu said that Barak's administration "brought Nasrallah to our fence." Referring to the year after the 2006 war as "a year of failure and treading in place.

"We believe we can pull this country out of the quagmire," Netanyahu said. "We can walk down a different path."

The new prime minister didn't specify what "path" he was talking about, but made his feelings clear about Iran.

Iran, which fully supports and backs Hezbollah, seems to be the prime target in the sites of Netanyahu.

"If Iran were to acquire nuclear weapons, it could give a nuclear umbrella to terrorists, or worse, could actually give [them] nuclear weapons," he said at the White House last week. "And that would put us all in great peril."

Is the "them" Netanyahu referred to Hezbollah?

As anyone who has ever sat in a bar in Beirut will tell you, rarely do you finish your drink without overhearing someone talk about the 2006 war or the overwhelming potential that there will be another war with Israel.

It's considered almost a given that there will be another Hezbollah-Israel face off.

Both sides -- Israel and Lebanon -- campaign and rouse support based on the 2006 war. Each one uses it, spinning it to their own advantage.

I doubt very much whether the civilians of southern Lebanon or Northern Israel view the war as either -- rather as a summer they hope will not repeat itself, but one that seems more and more likely to do exactly that.