(CNN) -- Lebanon's parliamentary elections will determine which path the country will take in the next four years -- the direction of Islamic militancy and closer ties to countries such as Iran and Syria, or a route to more westernization and openness. 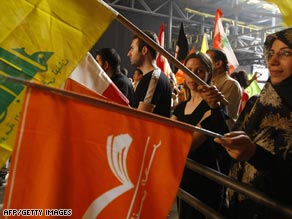 A rally for Hezbollah supporters with yellow flags and their allies, the Free Patriotic Movement in Beirut.

The results will undoubtedly dictate the course for the entire Middle East. Will the region remain steadfast in the face of an Iranian growing influence and stature or will the threat of a Shiite spread create new hostilities, conflicts and even redraw some maps?

Whatever the election results in Lebanon, they will set the stage and tone for the new U.S. administration in its attempt to change its image in a troubled ever-changing Middle East.

The Lebanese constitution calls for the president to be a Maronite Christian, the House speaker a Muslim Shiite and the prime minister Muslim Sunni. President Michel Sleiman is serving a six-year term which began in May 2008.

Lebanon is the only Arab country with a thriving and politically active Christian population, making it a significant ally of the west. Its Sunni population makes it a natural ally of the mostly Sunni Arab world. And its growing Shiite population has found a natural bondage and unconditional support from Shiite Iran.

These forces constantly exert an influence that's apparent in the country's social, political, and financial life.

Watch how international forces could play a role in the election »

The parliamentary elections are pitting a pro-western camp against Hezbollah, known for its anti-western views and attitudes. A majority in parliament will have a larger influence over choosing the House speaker and in turn will play a decisive role in approving the prime minister and cabinet.

In the past four years, the bloc led by current Prime Minister Fouad Siniora represented the parliamentary majority and enjoyed support from almost every country in the world except Iran and Syria.

It did however fail to move the country forward and it did not succeed in working effectively with the opposition. Perhaps because the opposition represented by Hezbollah focused only on calling the Siniora government to resign.

To this effect, the opposition organized a sit-in in downtown Beirut that lasted over a year. Then, following a blunt military takeover of Beirut by Hezbollah in May 2008, the Doha (Qatar) agreement was reached which led to an agreed-upon president and new election laws in favor of Hezbollah and their allies.

Hezbollah is considered a terrorist organization by many in the west but seen as a legitimate and heroic resistance by many Lebanese and Arabs. The world has witnessed in the past four years how Hezbollah is capable of creating havoc if it doesn't get its way.

No matter who wins a majority in the parliamentary elections, one thing is guaranteed: Lebanon will emerge as the same divided country that no party or entity seems able to unite.

Professor Shibley Telahmi has led extensive polls across the Middle East over the past years analyzing Arab attitudes and opinions on subjects ranging from democracy to Arab-U.S. relations. He says: "Whoever emerges a winner, they will need a transformative deal to form a government and they will face significant opposition."

Lebanon was bruised up during a 15-year civil war that changed forms many times and pitted Christians against Muslims before it drove Christians to kill Christians and Muslims kill fellow Muslims.

Things got so bent out of shape that some of the alliances on the ground today simply don't make sense.

The most famous or infamous of those alliances is that of Michel Aoun and the Armenian Tashnaq party with Hezbollah.

And it's one of the forces that experts believe might tip the balance.

A former Christian army general, Aoun once fought the Syrian occupation of Lebanon and vowed to break the neck of Syria's president. Now he stands by Syria's staunchest allies.

"It's all about the politics not the ideology" says Krikor, an independent voter who shared his views on why his fellow Armenians sided with Aoun and Hezbollah.

Krikor, who prefers to use only his first name, believes Armenians felt alienated under the old government. "Now that every vote counts, Armenians as a bloc went with those who supported them during ordinary times," he said

Aoun was also alienated by the old parliamentary majority which led him to Hezbollah's welcoming arms.

His supporters believe that his trips to Iran and Syria are meant to show a desire for healthy relations with the two countries and should not be interpreted as allegiance to either.

Aoun, who was exiled in France under the Syrian rule of Lebanon, is believed to be a potential future mediator between Hezbollah and the west.

What happens if Hezbollah imposes its strict Islamic rule on the country or even forces women to wear the head to toe cover known as the Chador?

Krikor rejects the notions and says" "Armenians are Christians who suffered a lot throughout history. They will side with you but they won't let you take away their will or their way of life."

Professor Telhamy believes a lot is riding on these elections. His nightmare scenario involves "an escalation in the Gulf region into a war that involves Iran." He stresses: "You should always look at the moving parts and their connectedness to other issues."

What concerns observers are the "unpredictable consequences" he says.

Will a Hezbollah win drive Iran to be more aggressive and defiant in its pursuit of nuclear technology and even nuclear weapons? Will it drive Israel to confront Iran militarily? Will the U.S. take part in any response against Iran?

And these are only a few possibilities in the long list of unpredictable consequences.

All About Lebanon • Hezbollah • Politics