(CNN) -- Many Jewish settlers in the West Bank believe the land was promised to them in the Bible by God. 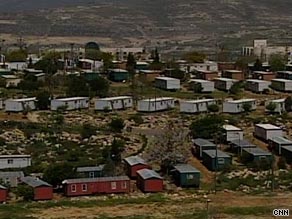 U.S. President Barack Obama has called for a freeze on all building in Israeli settlements in the West Bank.

By that rationale, the thoughts of the U.S. president or even their own leaders means little.

But there is concern among settlers that Prime Minister Benjamin Netanyahu may buckle under pressure from President Obama's new U.S. administration and freeze the expansion of any settlements in the West Bank or what they refer to by its biblical name, Judea and Samaria.

So far Netanyahu has spoken of his support for the "natural growth" of existing settlements -- putting clear water between himself and the U.S. president. Netanyahu is scheduled to make a major speech on the peace process on Sunday.

Around 280,000 Jewish settlers live in 121 settlements -- almost 200,000 more live in East Jerusalem, according to the Israeli-based Peace Now group, which wants settlements in the West Bank evacuated so that a two-state solution can be pursued.

But this is land the Palestinians want as a future state with East Jerusalem as its capital.

Critics - both within and beyond Israel - say the settlements are nothing more than a land grab that only complicates the task of achieving a lasting peace; but many settlers say the West Bank is Jewish land and if Palestinians want to live there they must abide by Israeli law.

David Ha'ivri has lived in the West Bank for almost 20 years and says the U.S. has no right to tell him where to live. "We have God on our side and we will be able to exist with help or without help of any foreign nation."

Over the years U.S. administrations have skirted around the issue of settlements, calling for a freeze on activity while tacitly accepting a continuation of building.

Israeli leaders have publicly supported the 2003 road map to peace, which calls for a settlement freeze, but in 2008, under the leadership of Ehud Olmert, "natural growth" was accommodated. Settlement growth last year alone was 4.9%, almost triple that of residential building in Israel itself, according to Israel's Central Bureau of Statistics.

The era of gentleman's agreements between Israel and the U.S. appear to be over.

Watch more on living in the settlements »

President Obama cannot be clearer in his call for a freeze on settlement activity and Netanyahu's policy could put him on a collision course either with the U.S. or with his largely right-wing pro-settler coalition.

Ha'ivri says: "Netanyahu was elected by the majority of people in Israel because they believed that he'd stand strong for the rights of the Jewish people in the land of Israel and if Netanyahu does not serve that purpose then we will change him with a leader who will."

Efrat is part of a large settlement block near Bethlehem which, during the presidency of George W. Bush, Israel assumed would remain as part of any future peace deal.

Resident Eve Harow complains that U.S. policy would mean that an illegal outpost, which sometimes consists of a couple of shacks, would be equated with her neighborhood, home to around 7,500 mainly religious Jews.

She believes she needs to be in this area to create a security buffer zone between Israel and the Palestinians, saying, "The threats that face us here, if we pull back from these areas then they will face Tel Aviv. Sadly Judea and Samaria under the Palestinians will not be a neighbor that wants my existence even in the narrow waist of Tel Aviv, so by being here in Efrat I'm actually protecting the people of Tel Aviv."

But the fact remains, Palestinians want the West Bank for their future state; the Obama administration agrees as does much of the international community.

Israelis remain divided about settlements. According to recent opinion polls, most agree that a two-state solution is the best path to peace. But they are divided about the chances of successful negotiations -- as well as the future of settlers of the West Bank.