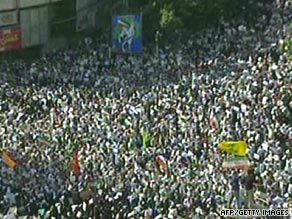 While pro-Ahmadinejad crowds descended on Vali Asr Square in central Tehran, Mir Hossein Moussavi urged his own supporters to cancel their plans to rally at the square after mass protests a day earlier in which seven people were reportedly killed.

Instead, his supporters gathered at a different location in Tehran, according to video footage of the rally.

Reporters for international news outlets, including CNN, could talk about the rallies in their live reports but were not allowed to leave their hotel rooms and offices.

The decision was an apparent reaction to video showing violence at recent demonstrations in support of Moussavi, who is disputing the results of Friday's presidential election.

Iran's government has criticized some of that coverage and the images, describing them as biased.

The Guardian Council met with the three opposition candidates -- Moussavi, Mehdi Karrubi and Mohsen Rezaie -- and asked them to specify the areas where they wanted a recount, a council spokesman told the official Islamic Republic News Agency.

Watch how the decision may not satisfy the opposition »

Moussavi rejected the recount, according to an official close to his camp, demanding fresh elections and accusing the country's religious elite of trying to further manipulate the outcome of the original vote.

An official close to the opposition leader's camp, speaking on condition of anonymity, said a recount would provide another opportunity for the government to manipulate the results.

Khamenei appealed to Iranians on Tuesday to stand behind the Islamic republic.

"Some people are against the unity of the Iranian nation and the solidarity of the Islamic system," Khamenei said in a meeting with representatives of the four presidential candidates, government-funded Press TV reported.

"Such acts and vandalism and some crimes that were committed are not related to the candidates' supporters but to disturbers of peace and all should stand against them," Khamenei said.

"I want to remind my brother Mr. Moussavi that we do know that the leadership of the revolution likes you and he has advised you if you have any complaints please refer to the Council of Guardians," Adel said.

The other two were identified as Behzad Nabavi and Saeed Hajjarian.

Ahmadinejad's resounding election win surprised many experts who had expected Moussavi to win or put up a much stronger fight.

Moussavi, a former prime minister thought of as a reformist, enjoys tremendous support among youth, who make up almost 60 percent of Iran's population of 70 million.

He tapped into their dissatisfaction with the faltering economy under Ahmadinejad and with an unemployment rate that tops 30 percent by some accounts, analysts said.

Watch how cyberspace is used by opposition »

But Kaveh Afrasiabi, a political scientist who supports Ahmadinejad, said the incumbent's widespread support in rural areas and small towns was the reason for his win with more than 62 percent of the vote.

Since Moussavi contested the results, his supporters have taken to the streets every day, often clashing with police and Ahmadinejad's backers. iReport.com: On the ground in Iran

Seven people were killed on Monday night in the capital, Tehran, after they allegedly attacked a military post near Azadi -- or Freedom -- Square, government-funded Press TV said.

The site was the same one where Moussavi had earlier in the day appealed to his supporters, a crowd of at least 10,000.

Moussavi's presence was his first public appearance since the election. He called on authorities to stop attacks on his supporters and urged his followers to continue demonstrating peacefully.

"You are not breaking glass," he said. "You are breaking tyranny."

Ahmadinejad was in Russia on Tuesday to meet with President Dmitry Medvedev. He was welcomed as the "newly re-elected president of Iran," with deputy Foreign Minister Sergei Ryabkov telling reporters, "The issue of elections in Iran is an internal affair of the Iranian people."

Reaction from other world leaders to the disputed election has been, for the most part, guarded.

"When I see violence directed at peaceful protesters, when I see peaceful dissent being suppressed, wherever that takes place, it is of concern to me and of concern to the American people," he said. "My hope is that the Iranian people will take the right steps in order for them to be able to express their voices, express their aspirations."

He said the initial reaction from Iran's supreme leader indicates that "he understands the Iranian people have deep concerns about the election."

"People want to see debate," he said. "How that plays out is something for the Iranian people to decide."

Criticism of the Iranian election earned the representatives of several European nations -- France, Germany, the Netherlands, Britain, Italy and the Czech Republic -- a visit to Iran's Foreign Ministry on Tuesday, where each received a notice of protest for interfering in Iran's internal affairs, according to Press TV.

The European Union had expressed concern over the use of force on protesters.