(CNN) -- A Canadian working for Newsweek magazine in the Iranian capital was "detained without charge" by Iranian authorities Sunday, the magazine said in a statement. 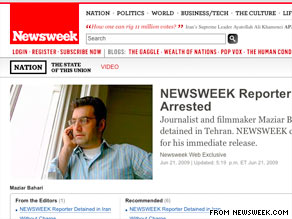 Newsweek calls for the immediate release of Maziar Bahari on its Web site Sunday.

Maziar Bahari has not been heard from since Sunday morning, Newsweek said. A journalist and filmmaker, Bahari has been living in Iran and covering the country for the past decade, according to the statement.

In addition, Life magazine, in a photo gallery posted on its Web site, said the Iranian photojournalist who shot the photos was missing. "He has not been in contact with us," the magazine said. An e-mail from a relative said the man had gone outside the day before and never came back, adding that the "government arrested them," Life said.

Newsweek's statement regarding Bahari said the magazine "strongly condemns this unwarranted detention, and calls upon the Iranian government to release him immediately."

"Mr. Bahari's coverage of Iran, for Newsweek and other outlets, has always been fair and nuanced, and has given full weight to all sides of the issues," according to the statement. "He has always worked well with different administrations in Tehran, including the current one."

The statement continued: "There are unconfirmed reports that several journalists have been detained today; the seizure of innocent journalists is a violation of the right to a free press in Iran.

"Newsweek asks that world governments use whatever influence they have with the government in Tehran to make clear that this detention is unwarranted and unacceptable, and to demand Mr. Bahari's release."

Bahari was asleep at 7 a.m. when security officers raided the apartment he shares with his mother, seizing his laptop and several videotapes, according to a story posted on Newsweek's Web site Sunday.

"Assuring her (the mother) that he would be their guest, they (the officers) then left with Mr. Bahari. He has not been heard from since," Newsweek reported.

All About Iran • Tehran • Newsweek Inc.