Iraqi Kurds head to the polls 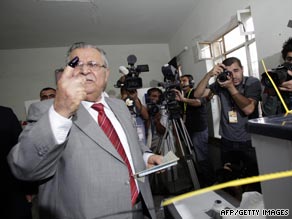 Iraqi President Jalal Talabani, a Kurd, shows off his ink-stained finger as he votes in Sulaimaniyah.

About 2.5 million eligible voters in the Kurdish region's three northern provinces of Irbil, Dahuk, and Sulaimaniya will elect their 111-seat parliament and next president.

Nechirvan Barzani, the prime minister of the Kurdish regional government, voted along with his wife when polls opened at 8 a.m. (1 a.m. ET), the official said.

Since 2005, the Kurdistan Regional Government (KRG) has maintained a secure region that has been largely free of the violence seen in other parts of Iraq. But a lack of government transparency, corruption, difficulty in delivering basic services, and political rivalries continue to plague the KRG.

A transparent and fair election, accepted as legitimate by voters, would be another step toward democracy and reform in Iraq and within the region.

"We hope that these elections will be a step forward that will help solve the disagreements with Baghdad," said KRG President Masoud Barazani, who held a news conference after he voted in Irbil.

Iraqi Prime Minister Nuri al-Maliki congratulated the Kurdish people on their elections in a speech delivered in Washington and broadcast on Iraq's state TV.

Al-Maliki said the elections will help a "great deal" in solving the region's problems and "dealing with all the inherited issues that we got from the former regime."

The Kurdistan Parliament-Iraq (KP-I) is a democratically elected legislature that governs the three KRG provinces. The region is run semi-autonomously from the Republic of Iraq's central government, affording the KP-I the right to amend any national legislation that falls outside the federal authorities' exclusive powers.

Once sworn in, members of the KP-I will elect the region's prime minister and confirm the Kurdistan cabinet.

The election is based on a proportional representation system that requires voters to select a party's list of candidates rather than one specific individual.

Of the 111 parliamentary seats, 11 are allotted to minorities that include a mandatory five Turkmen, five Christians and one Armenian.

CNN's Mohammed Tawfeeq and Yousif Bassil contributed to this report.