(CNN) -- More than 1,000 police officers were deployed to the southern Israeli Bedouin town of Rahat on Sunday morning as two dozen Jewish right-wing extremists protested what they said was unlawful Arab construction on neighboring hilltops. 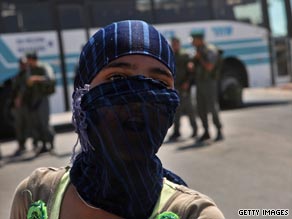 A Bedouin Arab girl protests near an Israeli police roadblock on the outskirts of Rahat in Israel on Sunday.

Several hundred Bedouin residents who are Israeli citizens held a counter-demonstration in the center of town.

About 25 protesters arrived in two buses under police presence. They were allowed to march a short distance, as police on horseback and in a helicopter hovered around.

Police closed off the main road to prevent the two sides from coming into contact.

"They are taking over the land of Israel without permission, building on hilltops as you can see here to the right and to the left," said Baruch Marzel, who is associated with the banned Kach movement.

Far-right parliament member Michael Ben Ari of the National Union party said allowing Bedouins to settle on hilltops while removing Jews from hilltops in the West Bank is discrimination.

In the town center, residents held a demonstration with lawmakers from Israeli Arab parties in attendance.

Talab El-Sana, a Bedouin from the Democratic Arab Party, urged the counter-demonstrators to show restraint.

"We told the people to be quiet, we are not against the policemen, we are against these people who call for discrimination or transfer for the Arabs," he told CNN.

The march ended without any major incident.