JERUSALEM (CNN) -- Israel moved to defend itself in the face of international criticism Monday over its eviction of dozens of Palestinian families from a neighborhood of Jerusalem they have lived in for generations. 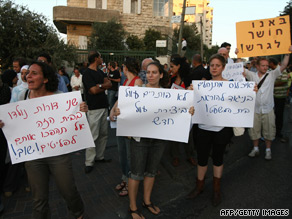 Left-wing Israeli activists protest against the eviction of Palestinians from their homes in east Jerusalem.

"I think a lot of the criticism is simply not fair," said Mark Regev, a government spokesman, who described the dispute as a legal one between two private parties over who had title to a property in East Jerusalem.

In the court action, a settler group sued claiming the Palestinians had violated an agreement under which they were allowed to live in the houses.

"As you know, the Israeli court system is independent and professional," Regev said, referring to the Supreme Court's decision that paved the way for the evictions. "Many times it goes on the Palestinian side if they think that's where the justice is and, in this case, they ruled in favor of the Jewish side."

After the Palestinians were moved out, two Jewish families moved in.

"Israel, the occupying power, once again has shown its commitment to the settler organizations by evicting more than 50 Palestinians, many of them children, from the houses where they have lived for more than 50 years," chief Palestinian negotiator Saeb Erakat said in a statement.

"Tonight, while these new settlers from abroad will be accommodating themselves and their belongings in these Palestinian houses, 19 newly homeless children will have nowhere to sleep."

Regev said he understood the plight of those Palestinian families who slept Sunday night on the streets, but suggested they should have made other plans.

"They chose for this political statement," he said. "Really, they should have known this was coming and made correct preparations."

And he denied the suggestion that the evictions were part of any systematic effort to move Palestinians out of East Jerusalem and move in Jewish families.

"There is no such government policy," he said. "On the contrary, here you see a situation where private people bought private property and that's what it is, and the court dealt with a land dispute between two private groups of people."

The United States, the United Nations and the European Union condemned the move.

"We are all, in the international community, very upset," U.N. Special Envoy Robert Serry said as he surveyed the scene.

None of the new Jewish residents wanted to talk with CNN.

In the United States, a State Department spokesman urged Israel to refrain from "provocative actions."

"As Secretary [of State Hillary] Clinton has stated previously, the eviction of families and demolition of homes in East Jerusalem is not in keeping with Israeli obligations under the Roadmap," said Robert Wood, referring to the 2003 "Roadmap for peace" plan.

"We urge that the government of Israel and municipal officials refrain from provocative actions in East Jerusalem, including home demolitions and evictions. Unilateral actions taken by either party cannot prejudge the outcome of negotiations and will not be recognized by the international community."

Israel has claimed East Jerusalem as part of its sovereign capital since taking the eastern part of the city from Jordan during the Six-Day War in 1967.

"We are appalled by the eviction in East Jerusalem this morning," the British Consulate said. "These actions are incompatible with the Israeli professed desire for peace. We urge Israel not to allow the extremists to set the agenda."

The evictions happened as Israel and the United States have been increasingly at odds over U.S. President Barack Obama's insistence that Israel's government freeze all settlement activity as a necessary step toward advancing negotiations with Palestinians.

The Bush administration had no problem with such projects as long as Israel built within the construction lines of existing settlements in the occupied West Bank.

All About Israel • Palestinian Politics • Jerusalem