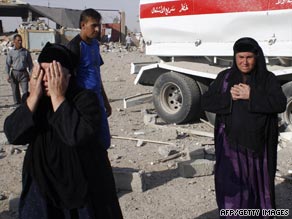 Explosions across the country have killed 50 and wounded 231 others, most of them civilians in Shiite areas, according to Interior Ministry spokesman Brig. Gen. Abdul Karim Khalaf.

Monday's deadliest attack happened near the northern city of Mosul when two truck bombs destroyed 32 homes, killing 30 people and burying others in the rubble, officials said.

The attacks come after a series of bombings in Iraq on Friday, mostly aimed at Shiite targets, which killed 50 and wounded 154 others. Friday's deadliest attack happened when a suicide car bomb exploded near a Shiite mosque where a funeral was taking place, killing 38.