LONDON, England (CNN) -- For the beautiful people, Azza Fahmy may be one of the best-known names in Egypt. 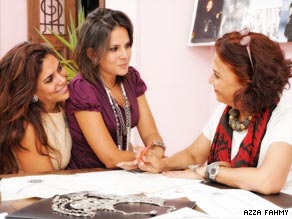 Designer Azza Fahmy consults her daughters on jewelry designs in her Cairo studio.

A high-end jewelry designer, Fahmy's creations have adorned such beauties as supermodel Naomi Campbell and Queen Rania of Jordan.

Working with precious metals and stones, Fahmy's work is inspired by the distinctive shapes, colors, textures and calligraphy of the country.

Cairo, the largest city in the Arab world nicknamed "The City of a Thousand Minarets," is Fahmy's home. She thinks she may have lived a previous life in old Cairo, which has now grown into a mega-city of almost 20 million inhabitants. See Azza Fahmy's picks of what to do, see and eat in Cairo

"It's a strong feeling when I'm walking in the streets going to old houses, churchs and old mosques," Fahmy told CNN. "It's something inside me which I can't describe, as if I've lived before in these places."

In the 1960s, Fahmy was the first woman to apprentice in Cairo's jewelry district. She says she'd whither and die if she ever had to leave Egypt.

She takes us on a personal tour of the beguiling Egyptian capital, where she finds inspiration in almost everything she sees.

"Everything in my mind is jewelry," she explains. "I turn it into jewelry."

The sprawling Ibn Tulun Mosque, the largest mosque in Cairo in terms of land area, is also considered the oldest mosque in the city to have survived in its original form.Cairo fact file: How to navigate Mideast's biggest metropolis

"It's one of my favorite mosques in Cairo," Fahmy says. "The beautiful windows of this mosque give me a lot of joy."

Fahmy says she's always fantasized about the windows of Ibn Tulun. "One day I'll do a project called the Ibn Tulun collection, because they have 126 windows, I think, and each one is different. I see them as earrings, hanging earrings," she says, laughing.

"They are geometrical designs each one different from the other, "she explains.

The jewelry designer says Ibn Tulun makes her feel serene, inspires her to "sit and meditate. The mosque is very strong, very discreet and very beautiful at the same time."

Fahmy explains that the 7th century Hanging Church, known in Arabic as Al-Muallaqah ("The Suspended"), is the most famous Coptic -- a sect of Christianity native to Egypt and Ethiopia -- church in Cairo. The church is dedicated to the Virgin Mary.

"Look at the details of the wood carving!" she exclaims there. "Look how they mix the pattern," she says, gently tracing it with her finger.

"You see this pattern? The cross in the middle and four rectangles around it? I want to do the design of this as a rectangle and then the motifs in metal."

"This is one of the oldest streets in Cairo," Fahmy explains as she walks along the colourful street bursting with life. "This street is part of me. It's my history, my life, my youth. This is the real soul of Cairo."

Fahmy stands in front of the Al Aqmar Mosque, known as "the moonlit," and says she's inspired by the details in the architecture. Her eyes are immediately drawn to details throughout the city, she says. "All my life is details, details, details. You become specific about everything."

"Do you notice these black and white stripes?" she asks.

Fahmy says she loves the way black and white are mixed together in Cairo to "create all this balance." What inspires you about Cairo? Tell us in the SoundOff box below

"Art is all about balance. They are perfect in how they balance things."

"I used to work in this place, Rabeh El-Selehdar," Fahmy explains as she enters the workshop where she trained as a young jewelry-making apprentice. "It was 40 years ago."

"I went to the workshop, I introduced myself to a man named Hajj Said and then I worked with him for about three years," she said, no small feat for an Egyptian woman in the 1960s.

She warmly greets one of the men working at the workshop.

"He is the nephew of my master. He still remembers me," she explains. "I used to sit on this table and I used to help them file and solder. It was the beginning of my life."

Fahmy's business, which evolved into the first Egyptian designer brand, is a family affair.

Her daughters, Fatima and Amina, work with her.

"I love the idea of the family business," she says. "I'd like to give this to my daughters [to] continue. I want to have a design house which can continue with the same message of carrying the Arab culture to the world."