JERUSALEM (CNN) -- An archaeological dig in Jerusalem has turned up a 3,700-year-old wall that is the largest and oldest of its kind found in the region, experts say. 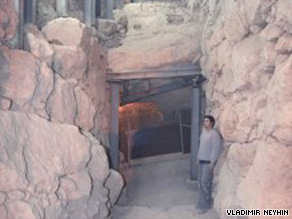 The wall is built of enormous boulders, confounding archaeologists as to how ancient peoples built it.

Standing 8 meters (26 feet) high, the wall of huge cut stones is a marvel to archaeologists.

"To build straight walls up 8 meters ... I don't know how to do it today without mechanical equipment," said the excavation's director, Ronny Reich. "I don't think that any engineer today without electrical power [could] do it."

Archaeologist Eli Shukron of the Israel Antiquities Authority added, "You see all the big boulders -- all the boulders are 4 to 5 tons."

The discovered section is 24 meters (79 feet) long. "However, it is thought the fortification is much longer because it continues west beyond the part that was exposed," the Israel Antiquities Authority said in a news release.

It was found inside the City of David, an archaeological excavation site outside the Old City of East Jerusalem on a slope of the Silwan Valley.

The wall is believed to have been built by the Canaanites, an ancient pagan people who the Bible says inhabited Jerusalem and other parts of the Middle East before the advent of monotheism.

Watch report on the discovery of the ancient wall »

"This is the most massive wall that has ever been uncovered in the City of David," Reich and Shukron said in a joint statement about the find. It marks the first time "that such massive construction that predates the Herodian period has been discovered in Jerusalem."

It appears to be part of a "protected, well-fortified passage that descends to the spring tower from some sort of fortress that stood at the top of the hill," according to the joint statement.

The spring "is located in the weakest and most vulnerable place in the area. The construction of a protected passage, even though it involves tremendous effort, is a solution for which there are several parallels in antiquity, albeit from periods that are later than the remains described here."

Such walls were used primarily to defend against marauding desert nomads looking to rob the city, said Reich, a professor at the University of Haifa.

"We are dealing with a gigantic fortification, from the standpoint of the structure's dimensions, the thickness of its walls and the size of the stones that were incorporated in its construction," the joint statement said.

Water from the spring is used by modern inhabitants of Jerusalem.

"The new discovery shows that the picture regarding Jerusalem's eastern defenses and the ancient water system in the Middle Bronze Age 2 is still far from clear," Reich said. "Despite the fact that so many have excavated on this hill, there is a very good chance that extremely large and well-preserved architectural elements are still hidden in it and waiting to be uncovered."

All About Archaeology • Jerusalem