JERUSALEM (CNN) -- A human rights group says more than half of the Palestinians killed during Israel's three-week offensive against Hamas in Gaza earlier this year were civilians, contradicting an Israeli military claim. 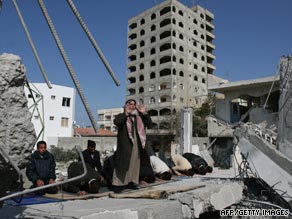 Palestinians pray on the rubble of a mosque destroyed in an Israeli strike in Gaza in February.

Israel had said that more than 60 percent of those killed in the military campaign were "terror operatives."

The Israeli human rights organization B'tselem released figures Wednesday, saying that, of the 1387 killed, 773 "did not take part in the hostilities" and, that of those, 320 minors were killed.

Israel says it launched the military operation in late December and early January in Gaza to stop Hamas and other militant groups from firing rockets into the southern parts of the country.

The accounting, which B'tselem says was based on "months of meticulous investigation and cross checks with numerous sources," is at odds with official numbers released by Israel.

In March, the Israeli military spokesman's office said that 1,166 Palestinians were killed in the Gaza operation, also known as Operation Cast Lead, and that 709 of them were "identified as Hamas terror operatives, amongst them several from various other terror organizations."

The rest included 162 names that had "not yet been attributed to any organization," according to the military. Israel said 295 Palestinians who were uninvolved in the fighting were killed, among them 89 children younger than 16.

At the time, the military said it was releasing the findings to counter false information from various Palestinian sources, and to remove doubt about the number of Palestinians killed in the operation.

B'tselem said it was it was unable to compare its list of names with that compiled by the Israeli military, which has declined to release the list of those Palestinians its says were killed in the fighting or the methodology used to compile the names.

The Gaza-based Palestinian Center for Human Rights (PCHR) published a study that put the total death toll at 1,419, including 1,167 "non-combatants," of which 255 were uninvolved police officers and 318 minors. The center said 252 took active part in hostilities.

Earlier this year, Jaber Wishah, a deputy director for PCHR, told CNN that Israel's decision to classify police officers as combatants is illegal.

"Such classification constitutes a willful violation of the principle of 'distinction,' which is a key component of customary international law. This raises serious doubts about the accuracy of the figures published by the Israelis," he said.

In a written statement, the Israeli military said the B'tselem report "is not based on fact or on accurate statistics" and that the group "does not have the tools, nor the intelligence capabilities with which it can within a necessary degree of confidence know the causes of death or the affiliations of these casualties."

Since the end of Operation Cast Lead, the Israeli government has consistently said that it went to great lengths to minimize civilian deaths and has blamed civilian deaths on Hamas, which it alleges used Gaza's civilians as human shields to launch attacks against Israel.

The Israel Defense Forces said in April that its forces "operated in accordance with international law" during the operation, but there were a few incidents in which "intelligence or operational errors" occurred.

According to a statement posted on IDF's Web site in April, Israeli investigations "revealed a very small number of incidents in which intelligence or operational errors took place during the fighting. These unfortunate incidents were unavoidable and occur in all combat situations, in particular of the type which Hamas forced on the IDF, by choosing to fight from within the civilian population."

Thirteen Israelis were killed during the three weeks of Operation Cast Lead.