JERUSALEM (CNN) -- The United Nations has condemned Friday's rocket attack on Israel from southern Lebanon, and urged both sides "to exercise maximum restraint." 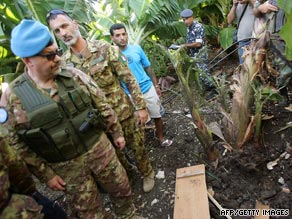 Israel's military fired between 12 and 18 artillery shells into southern Lebanon Friday shortly after the rocket attack on northern Israel, according to the Israeli military and a Lebanese army official.

There were no casualties in either incident.

Rockets fired from Lebanon struck open spaces in the western Galilee region of northern Israel, an Israel Defense Forces spokesman said. There were no reports of damage.

Israel retaliated by firing toward the source of the rocket fire, the IDF spokesman said. The shells landed near the southern Lebanese village of Qlayleh around 3 p.m. (8 a.m. ET), a Lebanese army official said.

The IDF spokesman said the Israeli military considers the rocket-fire incident to be serious and holds Lebanon's government and military responsible.

Israel Radio reported one rocket struck near the northern town of Nahariya and another landed near Gesher Haziv, a kibbutz, or collective community.

Israeli police spokesman Micky Rosenfeld said residents near Nahariya heard several explosions, and the remnants of at least one rocket were found.

There has been no immediate claim of responsibility for the attack.

U.N. Secretary-General Ban Ki-moon released a statement through his spokeswoman, condemning the attack. He said the United Nations mission in Lebanon, UNIFIL, "is investigating the circumstances of the incident in close cooperation with the Lebanese Armed Forces."

There are an estimated 30,000 rockets in southern Lebanon, all under the control of Hezbollah militants.

Israel fought a war against Hezbollah militants in Lebanon three years ago that is widely regarded as having empowered the Shiite militia.

CNN's Michal Zippori in Jerusalem and Nada Husseini in Beirut, Lebanon, contributed to this report.

All About Israel • Lebanon • United Nations Interim Force in Lebanon