By Habib Battah
Special to CNN

Habib Battah is a blogger, freelance journalist and documentary filmmaker based in New York and Beirut.

BEIRUT, Lebanon -- When I heard Snoop Dogg was coming to Beirut, I jumped at the opportunity to show the world a different side of the country I had grown up in. So I hit the phones, tracked down the promoter and before I knew it, I was driving to the airport to film Snoop's arrival. 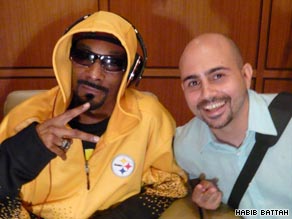 When I first met the Dogg (as he's known by his very courteous suit-wearing bodyguards), he was seated in the VIP lounge of Beirut International Airport, surrounded by entourage while awaiting passport control.

The U.S. rap legend had never been to the Middle East before, and I was wondering why he decided to perform in Beirut of all cities.

Outfitted in a hooded sweater, despite the sweltering heat of the Beirut summer, Snoop leaned forward and told me in his low voice: "There are a lot of places I could have started but I chose to start here because I felt they've been supporting me you know -- they've been down with me for long time."

By "starting" in Lebanon, Snoop meant that he intended to embark on a Middle East tour in the coming months. "Me and my man Roger had a nice conversation about putting together a Snoop Dogg Middle East tour ... so we gonna try to get that together over the next couple of months," Snoop, flanked by his forever-smiling local organizer, Lebanese entertainment mogul, Roger Kalaouz, told a room full of eager photographers and entertainment journalists.

But the Lebanese paparazzi still wondered, why Beirut?

"This is my first chance to party with the people of Lebanon," Snoop said. "They were always partying to my music but now they get a chance to actually party with Snoop Dogg.

"This is the party capital of the world," he added and the room filled with applause.

Hours later, Snoop drove the locals wild once again during his performance in front of thousands of adoring young fans by holding up a Lebanese flag on stage and then performing an impromptu sing-along with the chorus line "Beirut, Lebanon."

When the show ended just before one a.m., Snoop did not leave Beirut without living up to his promise to party hard. Acting on a tip from a source close to Snoop's circle, I managed to follow Snoop's entourage to the afterparty, at a massive and highly exclusive rooftop club overlooking the Mediterranean Sea and the Lebanese mountains.

I entered the club through the back entrance with members of Snoop's band that I had met at the airport. When we got inside, the champagne was flowing and the club was rocking with hundreds of people.

A mixture of house and trance music reverberated across all surfaces as fireworks lit up the evening sky. Snoop's band and crew were ecstatic, sporting looks of awe when they reached their VIP tables in the balcony section which boasts outdoor air conditioning.

And even though the European electric beat was quite a stretch from the hip hop he produces, Snoop himself seemed to be getting down -- waving his hands in the air.

But it wasn't long before the Dogg switched things up grabbed the microphone: "You are now rocking with the big Snoopie D.O. double jizzle for shizzle dizzle" he said, sending screams through the glamorous crowd.

Then he turned toward the DJ podium: "Hey! Yo! DJ! Why don't you play some of that Snoop Dogg sh*t? Once again the crowd was electrified, as Snoop began rapping to his track "Drop it Like It's Hot," (Part of the that performance is available on Snoop's Web site.)

Later he played other local favorites such as "Gin and Juice" and then rocked to a new track "That's the Homie" from his upcoming album "Malice in Wonderland" while being filmed by two cameraman and a flash light.

The Beirut show producer, Roger Kalaouz later explained that Snoop was actually filming part of the music video for the new track that night. And when Snoop left the club at 3 a.m., the party continued till seven in the morning, according to Kalaouz, in true Snoop fashion, back at the hotel.

Kalaouz says he's now preparing for Snoop's Middle East tour beginning in December, with a focus on cities in the oil-rich Arabian Gulf states, such as the UAE, Kuwait, Qatar and maybe even Saudi Arabia.

Though it remains unclear how much Kalaouz actually paid Snoop to perform in Beirut, he emphasized that the bidding process was intense with much competition from promoters in other Arab countries.