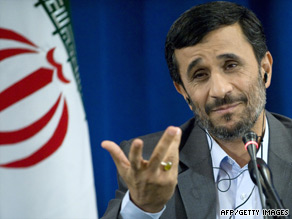 "We did not expect Mr. Obama within less than 48 hours, to basically violate the commitment that he spoke of at the United Nations," said President Mahmoud Ahmadinejad.

The Iranian leader was referring to Obama's Wednesday speech to the U.N. General Assembly, where Obama called for international unity in attacking the world's challenges.

Asked if he was expressing disappointment in the U.S. president, Ahmadinejad responded, "We simply didn't expect him to say something that was ... was baseless."

Earlier Friday evening Obama said "Iran is on notice" regarding its nuclear efforts, and that the international community is united in its opposition to Tehran's nuclear program.

"They are going to have to make a choice: Are they willing to go down the path to greater prosperity and security for Iran, giving up the acquisition of nuclear weapons ... or will they continue down a path that is going to lead to confrontation," he said at a news conference at the G-20 meeting in Pittsburgh, Pennsylvania.

Obama's comments came hours after Iran acknowledged the existence of a second uranium enrichment facility and ahead of next week's planned meeting between Iran and the five permanent United Nations Security Council members, plus Germany. The October 1 meeting will take place in Geneva, Switzerland.

Obama said he would not speculate on any course of action absent a satisfactory response from Iran.

"Even countries who a year ago or six months ago might have been reluctant to even discuss things like sanctions," are starting to become concerned, Obama said.

Obama said his "preferred course of action is to resolve this in a diplomatic fashion. It's up to the Iranians to respond."

The U.S. president said the conclusions about Iran's nuclear ambitions came as a result of the work of three intelligence agencies -- those of Britain, France and the United States. The work, Obama said, was done "to make sure that we were absolutely confident about the situation there."

The United States has known about the unfinished site since the Bush administration, according to senior U.S. officials who declined to be identified because of the sensitive nature of the negotiations. French intelligence officials were also aware of the facility for several months at least, a U.S. diplomatic source said.

It wasn't until Monday that Iran wrote a letter to the International Atomic Energy Agency, revealing the existence of the underground facility on a military base near the Shia Muslim holy city of Qom.

The facility is thought to be capable of housing 3,000 centrifuges, which is not enough to produce nuclear fuel to power a reactor but is sufficient to manufacture bomb-making material, according to a U.S. diplomatic source who read the letter.

Once Iran alerted the IAEA, Obama began sharing U.S. intelligence on the nuclear site with allies, particularly with Russia and China in an effort to get those countries on board with new sanctions against Iran, the officials said.

"Iran's decision to build yet another nuclear facility without notifying the IAEA represents a direct challenge to the basic compact at the center of the nonproliferation regime," Obama said, with Brown and Sarkozy standing at his side.

Iranian President Mahmoud Ahmadinejad did not mention the Qom plant during his visit to New York this week for the U.N. General Assembly sessions. He reiterated earlier claims that Iran has fully cooperated with nuclear inspectors.

He emphasized this again Friday afternoon at a news conference, where he said Iran complied with IAEA regulations requiring it be informed at least six months before an enrichment facility becomes operational.

"We still have a year left before that six months kicks in," Ahmadinejad said.

"I thought we were supposed to be encouraged for taking this action," he said.

Watch Ahmadinejad hit back at Obama »

Iran's revelation of a new nuclear site could actually "strengthen their hand" as Tehran heads into next week's talks, according to Paul Ingram, an analyst who studies Iran and nuclear nonproliferation.

"It will be seen as an indication that they are willing to play by the rules," said Ingram, the executive director of the British American Security Information Council in London, England.

He said the timing of Iran's revelation, between the U.N. General Assembly sessions and the October 1 meeting, is deliberate on Iran's part.

"This will make it more difficult to persuade them to abandon enrichment," Ingram said.

Iran had acknowledged only a uranium enrichment plant in Natanz, which nuclear inspectors visited recently. Iran also has an unfinished nuclear research reactor in Arak, and U.N. nuclear inspectors were allowed access to that facility this month.

Washington became aware of the covert facility near Qom several years ago, but a clearer picture about the facility emerged later, a U.S. counter-proliferation official said. The enrichment facility would probably not be operational for another year, the official said.

The official said the newly unveiled facility "doesn't really change the baseline" conclusion of the 2007 National Intelligence Estimate, which concluded that Iran could manufacture a nuclear weapons between 2010 and 2015.

The official added that there are suspicions about other possible hidden or undeclared nuclear-related facilities.