Pakistan says rebel blamed in Iran attack is in Afghanistan

ISLAMABAD, Pakistan (CNN) -- Pakistan denied Wednesday that it is harboring a Sunni rebel leader accused of orchestrating a suicide attack in neighboring Iran. 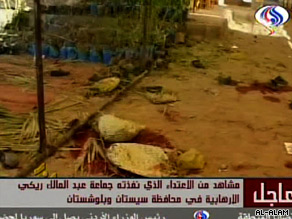 Tehran has vowed "a crushing response" to the Sunni rebel group Jundallah for Sunday's suicide bombing in Sistan-Baluchestan province that killed 42 people. Iran has accused the United States and Pakistan of having links to Jundallah.

Major Gen. Mohammad Ali Jafari, the Corps commander, said Monday that investigators have found documents connecting Rigi to security forces of the United States and Pakistan. Rigi's actions have "without a doubt been supported by these organizations," he said.

Iran summoned Pakistan's ambassador to its foreign ministry. There, he was told to urge his government to arrest the people behind the attack.

"We have heard that some of the government agents in Pakistan actually collaborate with the supporters of this savage act of terrorism, and we see it as very much within our rights to demand that they turn those criminals over to our nation," Iranian President Mahmoud Ahmadinejad said, according to the state-run Islamic Republic News Agency.

Pakistani President Asif Ali Zardari called on his Iranian counterpart, Ahmadinejad, on Monday to offer condolences and reaffirm his country's commitment to fighting extremism in the region, said a source inside the president's office.

"We have a good relationship with Iran and are committed in the fight against extremists. Why would we do anything that would damage and jeopardize our relationship?" he asked.

Iran observed a three-day mourning period to remember the people killed in the attack. A man carrying explosives blew himself up Sunday as participants headed to a conference between Shia and Sunni groups.

In the past, the predominantly Shiite central government in Tehran has accused Jundallah of fomenting unrest in the province. Iran has alleged that the United States and Saudi Arabia are funding the group. Jundallah says it is fighting for the rights of Sunni Muslims in the country.