Britain, Russia, others urge Iran to respond to uranium proposal 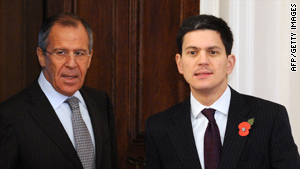 "We both want to see a prompt response from the Iranian regime in respect of the Tehran research reactor proposal," Miliband said at a joint news conference with Russian Foreign Minister Sergei Lavrov in Moscow.

The E3 + 3 refers to the five permanent members of the U.N. Security Council -- Britain, China, France, Russia and the United States -- plus Germany.

Mohamed ElBaradei, the director-general of the International Atomic Energy Agency -- the United Nations' nuclear watchdog -- has given Iran another 48 hours "to come up with a serious response," Miliband said

Last week, Iran said it tentatively agreed to the IAEA's proposal, but then proposed its own conditions.

The initial draft was supported by the United States, France and Russia. It calls for Iran to ship low-enriched uranium outside the country for refinement, possibly to Russia. The material would be shipped back to Iran in a form usable for civilian purposes.

However, Tehran proposes that its uranium be enriched on Iranian soil by a third country, under IAEA supervision, ElBaradei said last week. Iran said another possibility would be sending out the uranium in several shipments, not in one bulk stockpile, he said.

Iran says the IAEA is responsible for sending it 20 percent-enriched uranium, which Iran says is needed for the reactor at Tehran University. That concentration is insufficient for making weapons.

The United States and other nations are trying to eliminate Iran's weapon-making capabilities, although Iran says it wants uranium solely for civilian purposes.

Speaking on Monday, French Foreign Minister Bernard Kouchner also called on Iran to respond quickly to the offer or, he warned, France would not accept Tehran's response.

In his final speech to the U.N. General Assembly, ElBaradei on Monday said Iran needs "to be as forthcoming as possible in responding soon to my recent proposal, based on the initiative of the U.S., Russia and France, which aimed to engage Iran in a series of measures that could build confidence and trust and open the way for comprehensive and substantive dialogue between Iran and the international community.

"This is a unique and fleeting opportunity to reverse course from confrontation to cooperation and should, therefore, not be missed," he said.