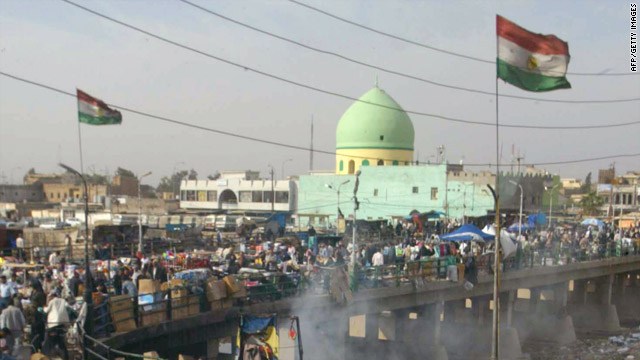 Baghdad, Iraq (CNN) -- A Kurdish member of Iraq's parliament said Monday that the United States is pressuring the "highest levels of the Kurdish leadership" to accept a compromise that would dictate how national elections would be held in January.

Mahmoud Othman said the United States urged the Kurdish majority in the northern oil-rich province of Kirkuk to agree to a proposal that would settle issues about the law that spells out how the election will be carried out.

"In both calls, the vice president echoed the president's position that timely elections are important and that we urge all parties to do their part to make them happen," he said.

A secure environment and political stability during and after the polls will be key as the United States looks to withdraw combat troops by August, leaving 50,000 in advisory roles, and then withdraw all U.S. forces by the end of 2011.

Some Kurds have complained that the U.S. proposals would favor the province's Arabs and Turkmen, though it was not clear on what they based that assertion.

Kurds have long regarded Kirkuk as an integral part of Kurdistan, and many want to be part of Iraq's autonomous Kurdish region. Arabs and Turkmen have their claims to the city, and all the groups want their voices and votes to be fairly represented in the political system.

Provincial elections that were to have been held in January were postponed indefinitely because officials there could not agree on how to apportion seats among the ethnic groups.

Last week, the Kurds threatened to boycott voting on the election law, thereby threatening to delay the election itself, which is scheduled to take place January 16. The constitution would allow for a delay, but not past January 31.

Iraq's election commission has said it needs at least 90 days after passage of any election law to prepare to carry out elections, which U.S. and Iraqi government officials call a vital step in Iraqi efforts to solidify a democratic system in the post-Saddam Hussein era.

The head of Iraq's Independent High Electoral Commission, Judge Qassim Aboodi, said Monday that if the law is not passed within a few days, the elections could be threatened altogether.

Othman described the U.S. efforts at pushing forward a compromise to the Kurds as being "counterproductive" and "making things worse." Though the proposal was submitted by the United Nations, Othman said, "the U.S. is behind this."

He said the U.S.-backed plan was not fair and urged that U.S. officials remain neutral.

Under Saddam's regime, Kurds were kicked out of Kirkuk, and many Arabs moved in, a policy called Arabization. But Kurds returned to the city in droves after the regime was toppled.

Sharp disagreements exist over which voter registries should be used in the elections, with the Kurds wanting a current one and the Arabs and Turkmen wanting registries from several years ago.

U.S. Ambassador to Iraq Christopher Hill and Gen. Ray Odierno, the top U.S. officials in Iraq, issued a statement Thursday urging lawmakers to decide that "rules, procedures, and decisions" for the election apply only to that vote.

They argue that it should not set precedent "for future political settlements related to Article 140, demographic change, disputed boundaries, or other contested issues," a specific reference to the Kirkuk question. Article 140 is the section of the country's constitution referencing the issue.

CNN's Mohammed Jamjoom and Jomana Karadsheh contributed to this story from Baghdad, Iraq.