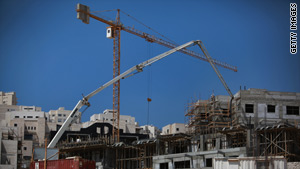 The Jewish state's Interior Ministry said it had approved the construction of 900 units in Gilo. The approval of construction moves forward the process for the project; it will now be opened to public objections.

Final approval will follow several other stages, and construction is likely several years away.

Washington said it was dismayed at the move.

"At a time when we are working to re-launch negotiations, these action make it more difficult for our efforts to succeed," White House spokesman Robert Gibbs said in a written statement.

"The U.S. also objects to other Israeli practices in Jerusalem related to housing, including the continuing pattern of evictions and demolitions of Palestinian homes. Our position is clear: the status of Jerusalem is a permanent-status issue that must be resolved through negotiations between the parties," Gibbs said.

"Neither party should engage in efforts or take actions that could unilaterally pre-empt, or appear to pre-empt, negotiations."

President Barack Obama entered office in January promising a new focus on the conflict. He appointed a Middle East peace envoy, George Mitchell, whose efforts have failed to break the deadlock.

Israeli Prime Minister Benjamin Netanyahu has refused to order a total freeze on all new Jewish settlement construction on the West Bank and in East Jerusalem, as the Obama administration originally demanded.

"The Israeli PM is prepared to adopt the policy of the greatest possible restraint regarding growth in the settlements in order to revitalize the peace process, this applies to the West Bank," Netanyahu's office said in a statement. "Jerusalem is Israel's capital and will remain as such."

The United States has stepped back from its position requiring a total freeze in settlement expansion, leading to uproar among Palestinians.

And the president of the Palestinian Authority, Mahmoud Abbas, has threatened to resign, which could lead to the collapse of the Middle East peace process if he does.

However, Jerusalem Mayor Nir Barkat called it a U.S. "demand" that Israel stop its construction.

"The demand to halt construction by religion is not legal in the United States or in any other free place in the world," he said in a written statement released Tuesday.

"I do not presume that any government would demand to freeze construction in the United States based on race, religion or gender and the attempt to demand it from Jerusalem is a double standard and inconceivable."

Asked if the construction had come up when Mitchell met in London with Israeli negotiators, U.S. State Department spokesman Ian Kelly said he didn't want to get into the "substance of these negotiations. It's sensitive," he said, adding that some Israeli press reports did say that the issue was raised in the meetings.

But he said he wouldn't "steer" reporters "one way or the other on it."

In a policy paper published in August, Palestinian Authority Prime Minister Salam Fayyad laid out a plan to create "a de facto state apparatus" within two years -- spurring speculation about whether a unilateral Palestinian declaration of statehood was forthcoming. But Sunday, Fayyad told reporters that his state-building process was different from a declaration of statehood.

"Getting ready for statehood and statehood proclamation are two different things," he said. "What we in the Palestinian Authority are concerned with is Part A of this, which is to prepare for that eventuality."

Fayyad's August proposal defined a vision for a Palestinian state based on 1967 borders and with East Jerusalem as its capital.

The Palestinian Authority was created to administer the Palestinian territories as part of the 1993 Oslo Accords between Israel and the PLO. As a representative of the Palestinians, the PLO was granted observer status at the United Nations in 1975.

The prime minister also indicated that the Palestinians may turn to the United Nations to give its support to a resolution backing the creation of a Palestinian state.