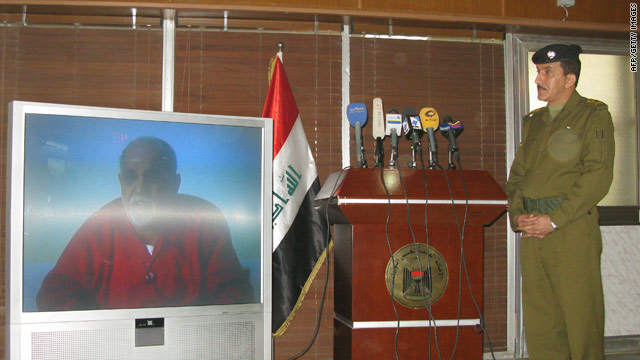 Baghdad, Iraq (CNN) -- The Iraqi government has aired videos showing three men, who claim to be members of the ousted Baath Party, saying they were involved in last month's devastating Baghdad attacks.

In recent months the Iraqi government has played a number of such videos for reporters. Many Iraqis have voiced skepticism about their authenticity.

In the videos shown Sunday, the men said they were Baath Party members who were involved in planning and executing the October 25 bombings at government buildings.

The two suicide vehicle bombings that struck the Ministry of Justice and other government buildings in October killed 160 Iraqis and wounded more than 500. It was Iraq's deadliest attack in more than two years.

The attacks mirrored a pair of bombings on August 19 at the Foreign and Finance Ministries that killed more than 100 people and wounded hundreds more.

The Islamic State in Iraq, an umbrella group that includes al Qaeda in Iraq, claimed responsibility for both the August and October attacks. The Iraqi government has said both attacks were a coordinated effort by Baath loyalists and al Qaeda in Iraq.

In recent weeks, the government and Iraqi Prime Minister Nuri al-Maliki have stepped up the anti-Baath rhetoric ahead of the country's upcoming national elections, an escalation that some fear is a political ploy to keep some Sunni Arab candidates from running in the elections.

Sunni Arabs -- a minority in now-Shiite-led Iraq -- dominated Saddam Hussein's Baath Party, which ran the country for decades and persecuted majority Shiites and minority Kurds. The party is illegal in Iraq now, and most of its former mid- and high-level officials are banned from government jobs.

In an interview with al-Iraqia State TV on Sunday night, which re-aired on Monday, government spokesman Ali al-Dabbagh said the attacks originated from people in Syria.

Al-Dabbagh cautioned that the Iraqi government is not accusing the Syrian government of involvement. He said a group based in Syria was planning and carrying out the attacks.

Some people say al Qaeda, some people call them Baathists. I would argue that they are probably both involved.
--U.S. Gen. Ray Odierno

He said the confessions shown Sunday were only a part of the information and confessions the government has.

After the August bombings, tensions between Iraq and neighboring Syria reached an all-time high and both countries withdrew their ambassadors. Iraq accused Syria of harboring Baath Party members who, it said, were financing and planning the attacks in Iraq.

Earlier in August, al-Maliki and a high-level delegation visited Damascus and asked the Syrian government to hand over a number of mid-level and senior Baathists living in Syria.

Syria refused, and the Iraqis accused Syria of supporting the August attacks by providing a refuge for Baathists who were working with al Qaeda in Iraq.

In late August, Syria repeated its willingness to help the Iraqis investigate the bombings and discounted the tapes the government had released as fabricated evidence.

"Syria informed the Iraqi side of its readiness to receive an Iraqi delegation to inspect the evidence available to them concerning the bombings' perpetrators," a Syrian official said, according to SANA, the state-run news agency. "Otherwise Syria considers what has been broadcast through the Iraqi media as mere fabricated evidence intended to serve internal political goals, and the conflicting and contradicting statements by the Iraqi officials are proof of that."

The top U.S. commander in Iraq, Gen. Ray Odierno, told reporters last week that investigations into the October bombings were under way and a number of suspects were in custody. He said al Qaeda in Iraq has teamed up with remnants of the Baath Party -- a statement that gave more weight to the Iraqi government's claims.

"We have been able to significantly reduce the capability of several groups to include al Qaeda and some of the Sunni rejectionist groups, so what I think we have seen happen over the last year or so is that these groups have started to work together. And so they have started to coalesce, especially at the local level. ... So it blurs the lines sometimes. And I think sometimes it's semantics. Some people say al Qaeda, some people call them Baathists. I would argue that they are probably both involved, they are coordinating at the local level," Odierno said.

When asked if there was any indication the attacks came from Syria, Odierno said: "I think my experience is that there probably was some movement of fighters or explosives coming in from Syria. But again, we will continue to work our way through that."

Odierno and Iraqi officials have warned that they expect more such high-profile attacks before the January national elections, the country's second national vote since the U.S.-led invasion in 2003.