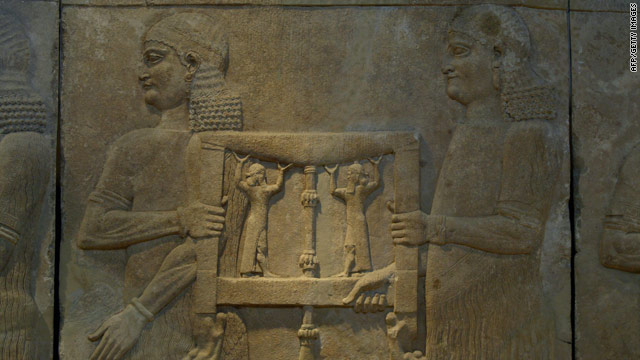 Artifacts such as this mural from 1894-1881 B.C. seen in the museum's Assyrian Hall will be shown on the virtual tour.
STORY HIGHLIGHTS

Baghdad, Iraq (CNN) -- It houses some of ancient Mesopotamia's rarest artifacts, but what is even harder to find at Iraq's National Museum are visitors.

So the museum has teamed up with Google and the U.S. government to create a "virtual museum" that will allow anyone with access to a computer to view its collections.

"Mesopotamia is the world's oldest civilization and there's no shortage of archaeological institutions in the United States and around the world, as well as curious individuals, as well as museum curators around the world who'd be interested in getting a chance to visit the museum," explained U.S. State Department official Jared Cohen.

Cohen spoke Tuesday shortly before an announcement by Google CEO Eric Schmidt and other U.S. officials that the online museum will be up and running by early next year.

"Now most people, either because of time, money, visa, you know, concerns about coming here, ... won't have the chance to walk through the museum as we are now," said Cohen, a member of U.S. Secretary of State Hillary Clinton's policy planning staff.

"And one of the things we want to do is remove those barriers preventing individuals from coming to the museum by making it available through virtual means."

More than 14,000 digital pictures of the museum's artifacts have been taken and will be electronically catalogued by Google for the virtual tour, Schmidt said at Tuesday's news conference.

Cohen said the idea originated during a visit to the museum in April with a delegation of Silicon Valley executives.

"Obviously the first question the delegation asked is, 'Do you have an online presence?' and the museum explained some of the struggles they've had in building those platforms," said Cohen.

"And so, our group of technology companies -- of which Google and YouTube were one of the representatives -- made a commitment to make some of the world's oldest artifacts available using 21st century technology."

Iraq's National Museum re-opened to the public in February, nearly six years after it was pillaged in the chaotic days following the fall of Saddam Hussein.

The price tag for the project was not divulged, but the U.S. State Department and Google are sharing in the cost.