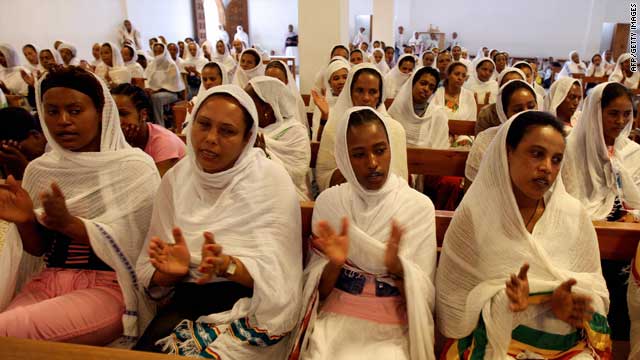 London, England (CNN) -- A recent spate of suicides by foreign maids in Lebanon is prompting outrage among human rights groups, who say the government is doing too little to protect migrant domestic workers from severe abuse.

Over the past seven weeks at least 10 women have died, either by hanging themselves or by falling from tall buildings. Six of these cases have been reported in local media as suicides and four more have been described as possible work accidents.

An Ethiopian woman working as a cleaner in Lebanon told CNN by phone that she was sad about the recent suicides, and that she had a friend who killed herself several years ago, when she too was working as a live-in maid.

"If the Madame maybe she is very bad, they feel there is no way, no solution," said the woman who asked not to be identified, referring to abuse by the female employer. "Everyone has a different case," though she added.

This is modern day slavery ... these suicides are just the tip of the iceberg
--Wissam, Ethiopiansuicides.blogspot.com

"We are clearly seeing a high rate of suicide. The two leading causes of death for migrants is suicide [and] dying while trying to escape from employers," said Nadim Houry, Senior Researcher for Human Rights Watch (HRW) in Lebanon.

"This pattern [of abuse] is on going," Houry told CNN, citing "bad working conditions, isolation and a feeling of helplessness that comes from lack of recourse," as the sources of desperation that can drive these women to their deaths.

"It is ridiculous ... this is modern day slavery," said Wissam, a Lebanese activist who started a blog after he noticed four Ethiopian women committed suicide within 10 days in October.

"What about the things we don't know? These suicides are just the tip of the iceberg of the mistreatment of these women," he said.

In August 2008 HRW reported that more than one domestic worker was dying each week, either from suicide or failed escapes from abusive employers.

There are more than 200,000 migrant domestic workers in Lebanon -- roughly one per every four families. Overwhelmingly they are women in their 20s and 30s who come alone from the Philippines, Sri Lanka, Ethiopia, Indonesia, Nepal and Madagascar, to earn money to support families back home.

According to HRW, more than one third of foreign domestic workers in Lebanon are denied time off and more than 50 percent work at least 10 hours per day.

A 2001 International Labor Organization survey of Sri Lankan domestics in Lebanon found that 88 percent were given no time-off. Among the 70 respondents, nearly 30 percent said they were not given enough food to eat.

Over the past several years there have been increasing reports of exploitation documented in the media, including testimonies from domestic workers about withholding of wages, verbal or physical abuse and restrictions on free movement. Statistics on abuse are difficult to find though, because employees are often afraid to complain, prevented from doing so, or simply don't know how.

"The isolation is key ... Their passports are confiscated and they are often locked in. They are far from home, and not all of them can contact their families -- some can once per month," Houry told CNN.

One Nepalese maid who spoke to HRW from her hospital bed, after jumping from the third floor of her employer's building to escape, said she had seen snow-capped mountains from the window and thought she could walk across to find her village. She did not understand that Lebanon was thousands of miles away from her home in Nepal. "She just had no idea where she landed," Houry said.

Both charity organizations and foreign embassies in Lebanon say they have their hands full dealing with runaways and incidents of abuse.

In August, the Philippines Embassy reported that 117 women who had escaped from maltreatment were sleeping on the embassy floor. The Catholic relief organization CARITAS also estimated that they have an average of 40 runaway domestics sleeping in their shelter at any one time.

Roots of the Problem

The abuse faced by migrant domestic workers is a common problem throughout the Arab Middle East, both because of generally poor labor regulation and also cultural prejudice.

"The responsibility lies primarily with the state. There are no inspectors who can check on working conditions. The laws need to be modified," Houry said.

"The mistreatment of these women and the absence of any government protection is not just in Lebanon -- it's in all the Arab countries," Wissam said.

Neither the Lebanese Labor Ministry, nor General Security, who regulate migrant workers, could be reached for comment on this article.

Because domestic work is performed in the private sphere, it is not considered formal labor and is not covered by Lebanon's labor laws.

In January, the government issued a uniform contract for all maids, which took the critical step of guaranteeing one day off per week and decent working conditions. Rights activists say that the contracts though are not being enforced.

Both Houry and Wissam also pointed to social norms of prejudice that condone abuse. "There is racism against people of poor background and darker skin," Houry said.

This past summer an HRW investigation found that 17 private beaches, out of a nation-wide total of 27, do not allow Asian or African domestic workers to swim, which they argued reflects latent cultural racism in Lebanon.

"There is a mind set among some that says these women have to work for me, and if they don't do it, I have to beat them," Wissam said. "This misconception dehumanizes these women."