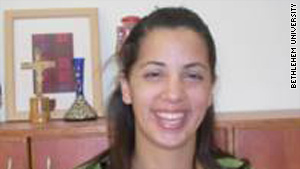 Berlanty Azzam, a Palestinian, says she does not understand "why Israel is preventing me from continuing my studies."
STORY HIGHLIGHTS

Jerusalem (CNN) -- An Israeli high court ruled Wednesday that a female college student deported to Gaza by the Israeli military will not be allowed to return to the West Bank to finish her studies.

Berlanty Azzam, 22, was a senior studying business at Bethlehem University with two months left to graduate when she was stopped at an Israeli army checkpoint in late October. Azzam said the Israeli military blindfolded and handcuffed her before deporting her to Gaza.

At the time, the Israeli military released a statement saying Azzam was residing illegally in the West Bank and had overstayed a permit "allowing her to stay in Jerusalem for a few days in August 2005."

Azzam, who grew up in Gaza, left her home four years ago after receiving a travel permit from the Israeli government to visit Jerusalem. After her deportation, Azzam said she was "scared of something like this happening" and had not returned home to Gaza for that reason. She acknowledged that the Israeli government had issued a temporary permit, but said she went to the West Bank because it was the only way for her to attend school.

Azzam's case was taken up by Gisha, an Israeli organization that advocates for Palestinian freedom of movement, which petitioned the Israeli court to reverse the military's deportation of Azzam.

In its ruling, the court noted that while Azzam was not considered a security risk, it accepted the military's argument that Azzam had entered the West Bank illegally.

I cannot imagine why the state of Israel is so insistent on preventing Palestinian young people ... from accessing higher education.
--Yadin Elam, Gisha attorney
RELATED TOPICS

Yadin Elam, a Gisha attorney, questioned the factual basis for the court's decision Wednesday and noted the lack of consistency in the decision.

"It is unfortunate that the court, which in its interim decision asked state officials to permit Berlanty to return to Bethlehem to complete her degree, refrained from ordering them to do so when they refused," Elam said. "I cannot imagine why the state of Israel is so insistent on preventing Palestinian young people, against whom it makes no security claims whatsoever, from accessing higher education."

In a statement released by Gisha, Azzam said she was disappointed by the decision and did not "understand why Israel is preventing me from continuing my studies."

The Israeli government has imposed extremely tight restrictions on Palestinians leaving Gaza in an effort to isolate the Islamic fundamentalist group Hamas, which controls Gaza. The restrictions have extended to Gaza residents who have been accepted to universities in Europe and the United States in addition to the West Bank.

The issue received notoriety last year when the U.S. State Department exerted pressure on Israel to allow some Fulbright scholarship winners to leave Gaza to attend schools in the United States.