House uncovered in Nazareth dating to the time of Jesus 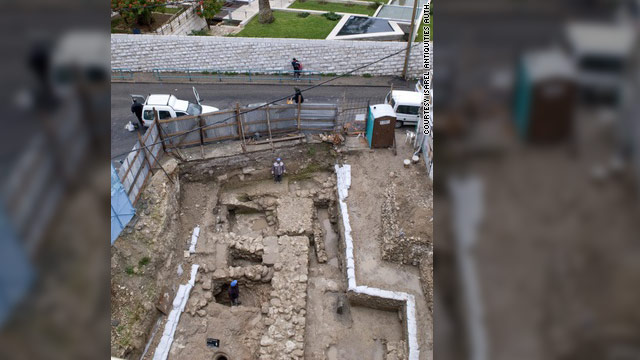 The remains of the ancient dwelling will be displayed as part of a new center in Nazareth honoring Mary.
STORY HIGHLIGHTS
RELATED TOPICS

Jerusalem (CNN) -- Archaeologists in Israel say they have discovered the remains of a home from the time of Jesus in the heart of Nazareth.

The Israeli Antiquities Authority said the find "sheds light on the way of life at the time of Jesus" in the Jewish settlement of Nazareth, where Christians believe Jesus grew up.

The find marks the first time researchers have uncovered the remains of a home in Nazareth from that time period, the Israeli Antiquities Authority said in a statement.

"The building that we found is small and modest and it is most likely typical of the dwellings in Nazareth in that period," Yardenna Alexandre, excavation director for the authority, said in the statement.

"Until now a number of tombs from the time of Jesus were found in Nazareth; however, no settlement remains have been discovered that are attributed to this period."

Christians believe that Mary, the mother of Jesus, lived in Nazareth with her husband, Joseph. They believe Mary was in Nazareth when the angel Gabriel revealed that Mary would give birth to the son of God, a baby to be named Jesus.

A number of burial caves that date to the early Roman period also were discovered close to the inhabited area during the excavations, the authority said.

The discovery was made in the modern city of Nazareth during an excavation in advance of construction of the International Marian Center of Nazareth, which will illustrate the life of Mary.

An association in Nazareth plans to conserve and display the home's remains in the center. It will be built next to the Church of the Annunciation, which stands on the spot where Catholics believe Mary once lived.

The Church of the Annunciation is in the heart of Nazareth, above an older church and atop the ruins of a church from the Byzantine period.

In the middle of these churches is a cave that was believed in antiquity to be the home of Jesus' family. Researchers found storage pits and cisterns in the compound of the Church of the Annunciation, many of which date to the time of Jesus, Israeli archaeologists said.

In the excavation, a large, broad wall that dates to the 15th century was exposed. It was constructed on top of and used the walls of an ancient building, the statement said.

This earlier building -- the one that dates to the time of Jesus -- consisted of two rooms and a courtyard in which a rock-hewn cistern collected rainwater. Few artifacts were recovered from inside the building -- mostly fragments of pottery vessels from the first and second centuries.

Also, researchers found several fragments of chalk vessels, which were used by Jews in this period because such vessels were not susceptible to becoming ritually unclean, researchers said.

Another hewn pit, whose entrance was apparently camouflaged, was excavated and a few pottery fragments from the early Roman period were found inside it.

"Based on other excavations that I conducted in other villages in the region, this pit was probably hewn as part of the preparations by the Jews to protect themselves during the great revolt against the Romans in [A.D.] 67," Alexandre said.