(CNN) -- Torrential downpours, dense fog, rugged terrain and raging rivers have made rescue efforts in Taiwan increasingly difficult and dangerous in the wake of Typhoon Morakot. 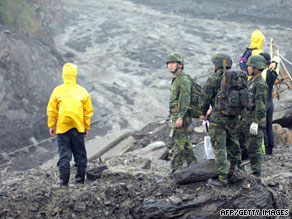 Rescuers and soldiers try to cross a swollen river in Kaohsiung County, Taiwan, on Wednesday.

Washed out roads and bridges rendered ground rescue operations virtually impossible as workers searched Thursday for stranded villagers in the central and southern regions of the island. Rescuers were forced to search by helicopter, inflatable boats and zip-line mechanisms that suspended them over the muddy waters coursing below.

In some cases, food drops have been conducted over isolated villages tucked amid the rugged terrain as villagers sought higher grounds to stay dry.

The storm dumped up to 83 inches of rain on some parts of the island, according to the U.S. National Oceanic and Atmospheric Administration.

By Thursday morning the government had counted 108 deaths, 62 people missing and 45 injured.

Most of the missing are from Kaohsiung County, he added.

There, where more than half the deaths occurred, a makeshift morgue was set up, as bodies emerged in the bloated local river at the foot of the mountains. A funeral director told CNN some 200 bodies, many from neighboring villages, had arrived. Relief workers cleaned and photographed the bodies, preparing them for relatives trying to identify loved ones.

One woman said she knows her mother is still alive despite being stranded in the mountains. Dian Xin Yin greeted every helicopter arriving at a rescue camp Wednesday, hoping her mother is onboard.

"I don't know when the helicopters will come. They don't have a specific order of which villages to search," she said. "The authorities control the schedule."

Watch what rescuers face in Taiwan »

The organization has been helping the government dispense food, water and other necessities from a central command center, where helicopters are loaded up for their humanitarian missions, he said.

One pilot said helicopters rescued 115 people Wednesday, far short of the goal of 350. Still, nearly 14,000 people had been rescued since the typhoon made landfall over the weekend, according to the Interior Ministry.

Shu Yue Hao told CNN she was forced to flee her home in the village of Jia Mu after rain inundated it and seven other houses. Appearing tired, she was taken to a rescue shelter.

"I leave everything up to God," she said.

Earlier in the day, Taiwan President Ma Ying-jeou toured the Jiadong and Linbian townships in Pingtung County. He later visited Kaohsiung County, where a wall of mud inundated and cut off the village of Shiaolin.

In Kaohsiung, according to Taiwan's Interior Ministry Wednesday, 200 people were trapped in the village of Namahsia and 38 -- including 18 who were injured -- were rescued by helicopter, while in the village of Maolin, where 200 to 300 people were feared trapped, rescue workers were forced to suspend operations because of bad weather.

The ministry also reported Wednesday that 1,500 people were in urgent need of aid in Liugui, also in Kaohsiung County. It said the air force had rescued 14 people from that village, including one who was injured.

Ma instructed government officials to "put themselves in the shoes of the victims who are suffering as a result of the disaster," according to statement from his office. Ma showed special concern for Shiaolin because of the severe damage.

"Therefore, the president said he is monitoring the situation with a heavy heart," the statement said.

The bodies of three people aboard a helicopter that crashed Tuesday in the mountains of Pingtung County were recovered Wednesday, the National News Agency reported. iReport.com: Volunteers mobilize to help typhoon victims

The emergency center said 16,705 people had been relocated. It said Taiwan had opened 151 shelters that were housing 8,338 displaced people. Others are thought to have sought shelter with relatives and friends.