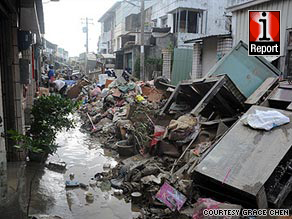 This image from an ireporter emphasizes the damage inflicted by Typhoon Morakot.

Officials from Hong Kong said they would recommend sending HK$50 million (US$6.45 million) in aid. The aid request needed to get final authorization. Once that happens Hong Kong will join a growing group of countries and territories that have rushed to help typhoon-battered Taiwan.

More than 30 countries have offered money, helicopters, medication or other supplies.

"They have presented the goodwill to help," said Benjamin Chi, a government spokesman.

Taiwanese President Ma Ying-jeou toured the Jiadong and Linbian townships in Pingtung County Thursday, then visited Kaohsiung County, where a wall of mud had cut off the village of Shiaolin.

Meanwhile, nearly 1,700 people were rescued from areas devastated by the storm, and a government spokeswoman said she believed "the situation is getting better."

Janet Chang said 1,692 people were rescued Thursday, mostly from the two mountainous counties that bore the brunt of the storm -- Kaohsiung and Pingtung.

However, a funeral director in coastal Kaohsiung County, where a makeshift morgue was set up, told CNN that about 200 bodies had arrived there -- many from neighboring villages. Relief workers cleaned and photographed the bodies, preparing them for identification by loved ones.

Chang said that based on official figures, 45 people were injured in the storm and 59 remain missing. She could not say how many more people needed to be rescued.

Watch a grandmother describe her escape »

Since the typhoon made landfall over the weekend, nearly 15,700 people have been rescued from villages hit by mudslides and floodwaters, according to official government figures.

Most of the missing were in Kaohsiung County, the National Disaster Prevention and Protection Commission reported.

Watch a makeshift morgue and funeral »

Torrential downpours, dense fog, rugged terrain and raging rivers have made rescues difficult. Washed out roads and bridges rendered ground rescue operations virtually impossible in the central and southern regions of the island. Rescuers were forced to search by helicopter, inflatable boats and zip-line mechanisms that suspended them over the muddy waters raging below.

In some cases food drops have been conducted over isolated villages tucked amid the rugged terrain, as villagers sought higher ground to stay dry.

The Central Weather Bureau in Taiwan said that over a one-day period after the typhoon hit, Pingtung County received a record 55 inches of rain (1,403 mm). Elsewhere on the island, rainfall amounts were as high as 83 inches (2,108 mm).

Seattle, Washington, one of the wettest U.S. cities, has an average annual rainfall of 37 inches per year (940 mm).

Isolated scattered showers and thunderstorms were forecast for Taiwan overnight Thursday into Friday, mostly in the north, where the capital is located, said CNN International meteorologist Brandon Miller.

"As a whole, the weather actually is pretty good," he said. It was 90 degrees (31C) late Thursday. Miller said Taipei had had "significant rainfall" of 5 or 6 inches (150 mm) over the past two days.

The Red Cross is helping the government dispense food, water and other necessities from a central command center, where helicopters pick up the supplies for their humanitarian missions, said organization spokesman Christian Li on Wednesday.

Economic losses due to Morakot have been estimated at U.S. $274 million.