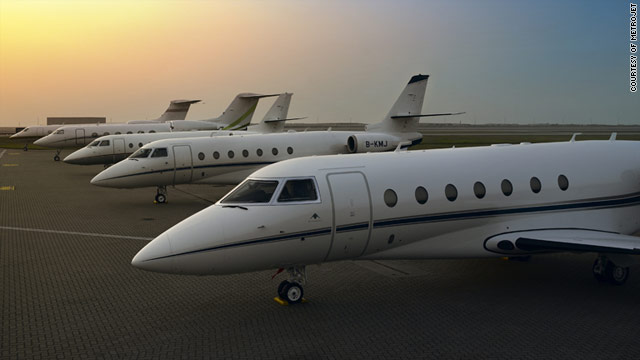 Private jets under management at Hong Kong's MetroJet has increased six-fold in the past five years, thanks to a boost in sales from mainland China.
STORY HIGHLIGHTS

Now, she runs a boutique operation that helps new Asian millionaires get their own jet.

With the explosion of fortunes in China comes a lift in private aircraft sales. In a country that's second to the U.S. in the number of millionaires -- with 1,363 people worth US$150 million and 189 billionaires, according to the Hurun List -- there are ample opportunities to find clients, Chung said.

In developed markets, customers go for pre-owned models but not in this part of the world. "In China everyone wants a brand new airplane," Chung said.

For companies that manage private jets, business from rich mainlanders is thriving.

"Five years ago in Hong Kong there were less than ten business jets; today you have 40," said Björn Näf, CEO of Metrojet in Hong Kong. "Four years ago, Metrojet had four aircraft [under management]; today we have 26."

A contact in an exclusive online social network, a Small World, told her there was an airplane on sale. She was interested and followed the lead. She didn't finalize the transaction, but she saw an opportunity to develop a new business.

Chung was already supplying high net worth Chinese with exclusive wines at the time, and she already had a network of potential clients. Prior to the financial crisis, the 30-year-old entrepreneur brokered deals to bring mainland Chinese companies to the stock market.

In secretive China, those in its business elite are coy. But Chung had an upbringing that helped her enter an otherwise closed world.

Five years ago in Hong Kong there were less than ten business jets; today you have 40
--Bjorn Naif, CEO of Metrojet
RELATED TOPICS

Her father, Zhong Qiong, is a first generation industrialist who started his business in China shortly after the nation opened to the west in the 1980s. Without a son as heir, he set out to educate Chung -- the eldest of his three daughters -- to become an entrepreneur like himself. "Since [age] seven my father always brought me to the meetings," Chung said.

Her fortunes have risen in tandem with her family's social circles, and have allowed her entry into otherwise closed circles. "Half of my clients are in the property business," she said.

There are problems for the nouveau riche with sky-high ambitions in China: waiting lists. New plane orders can take up to three years to fill, Chung said. Following the global crisis, however, the executive aviation industry lost many buyers just as jets ordered before the meltdown were being finalized for delivery.

For new buyers who are impatient, they can jump the queue -- for a price.

"The position costs one or two million," Chung said. Parting with this amount means "you can buy it for next month."

Getting the plane is only part of the problem. Once obtained, a new set of inconveniences awaits Chinese owners of private aircraft. "China is not too open for aviation, they're closed," Chung told CNN.

This means that much red tape comes with civil aviation in China and a major disadvantage: It can't be used on short notice.

"In the U.S. if you have an aircraft, you can call the pilot and fly," Chung said. "In China it takes one or two days."

Landing permits and other authorizations often require long processing times. For this reason, according to Chung, it's not uncommon to see jet owners still flying on commercial airlines. "Aviation in China is like 30 or 40 years behind the U.S.," she said.