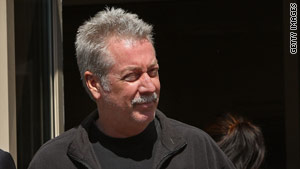 Crucial pretrial hearings in Drew Peterson's murder trial seek to block statements from the women in his life.

(CNN) -- Stacy Peterson had disturbing things to say about her husband, Drew Peterson.

She is still missing, but her statements about former Bolingbrook police Sgt. Drew Peterson, who is accused of murdering his previous wife, may start to come out in court at a crucial pretrial hearing that begins Tuesday.

Her statements, according to court documents, are likely to include her suspicions and fears of Peterson.

At the center of the debate is whether hearsay evidence can be used at Peterson's trial. Hearsay is what one person says to another, outside of a courtroom setting. Because courts prefer to hear from the original source, the person who hears a statement is usually not permitted to tell judges and juries about the statement.

Peterson is accused of murdering his third wife, Kathleen Savio. Her body was found in an empty bathtub in March 2004, and her death initially was ruled an accidental drowning. Her death was reinvestigated after Stacy Peterson's disappearance and then was ruled to be a homicide. Drew Peterson has been charged with first-degree murder. He denies the charges.

If prosecutors get their way, Stacy Peterson will haunt her husband's murder trial.

In 2004, the U.S. Supreme Court decided in the case Crawford v. Washington that hearsay evidence violates a defendant's Sixth Amendment right to confront the witnesses against him or her.

That case added hurdles for the use of hearsay evidence, according to legal analysts.

But courts have been establishing exceptions to the hearsay laws in cases in which witnesses are silenced. And the list of exceptions has grown over the years, especially if the hearsay can be used to show a witness or victim's state of mind. In those cases, jurors are warned not to automatically accept the statement as truthful.

Illinois passed a law in 2008 -- dubbed "the Drew Peterson law" or "Drew's law" by the media -- that allows hearsay evidence if prosecutors believe the victim was killed to prevent his or her testimony.

The defense maintains in its own motions that the law unfairly targets Drew Peterson because it was passed after the investigation was launched. In a legal response, prosecutor James W. Glasgow called the defense claim "a thinly veiled effort to sway the court into believing that this statute pertains exclusively to this prosecution."

Stacy Peterson was 23 when she vanished in October 2007. According to the prosecution, she had voiced doubts about Savio's demise and told others before she vanished that she feared the same fate.

After Stacy Peterson's disappearance, the state performed a second autopsy on Savio, concluding in November 2007 that her death was a homicide. A third autopsy was performed at the request of the Savio family. The private medical examiner determined the cuts, lacerations and bruises on her body indicated a struggle.

Drew Peterson was charged last year with first-degree murder and held on $20 million bond. He pleaded not guilty. He has not been charged in Stacy Peterson's disappearance.

Stacy Peterson made statements regarding Drew Peterson's whereabouts the night of Savio's death, according to a pastor and other potential witnesses.

Six years after Savio's death, prosecutors also intend to introduce her words through family members who recall their conversations with her, as well as through letters she wrote to police.

The hearings, which could last a month, will determine the merit and relevance of the hearsay statements. As many as 60 witnesses may testify, according to CNN affiliate WLS-TV in Chicago.

James Carey, a law professor at Loyola University law school in Chicago, said prosecutors must prove that Drew Peterson intentionally got rid of Stacy Peterson to keep her from testifying.

"Having newly-minted evidence, but not the evidence to prosecute anyone for it, the Will County State's Attorney decided to draft a new law," wrote Drew Peterson's attorney, Joel A. Brodsky. He was unavailable for comment Monday, an office assistant said.

It is not yet clear what evidence prosecutors are seeking to present. Their motion was filed under seal.

However the court decides on the Peterson evidence, an appeal is likely and the precedents could become legal landmarks.

Beckett said hearsay evidence is a serious disadvantage to the defense because they cannot cross-examine the person being quoted.

There are no eyewitnesses or physical evidence to link Drew Peterson to Savio's death, his attorneys argue.

Savio's family has been hopeful the new law will help prove Drew Peterson's involvement in their daughter's case.

"We hope it's going to come out the right way," her father, Henry Savio, told CNN reporters in 2009, shortly after Drew Peterson was charged.