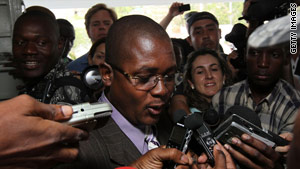 Port-au-Prince, Haiti (CNN) -- A Haitian attorney representing 10 Americans charged with kidnapping for trying to take 33 children out of Haiti told CNN Sunday he has resigned.

Edwin Coq said he had quit as a lawyer for the Americans. It wasn't immediately clear who would replace him.

"I know that they have been looking at other lawyers," said Phyllis Allison, mother of one of those detained, Jim Allen. "They don't know what to do."

The 10 missionaries, including group leader Laura Silsby, were charged Thursday with kidnapping children and criminal association. Coq had said that court hearings would be held Monday and Tuesday for his clients, who have been split up at two prisons.

He has tried to get the Americans released, though he has also blamed Silsby for the missionaries' legal troubles.

The Americans were turned back a week ago as they tried to take the children across the border into the Dominican Republic without proper documentation. They said they were going to house them in a converted hotel in that country and later move them to an orphanage they were building there.

The Americans have said they were just trying to help the children leave the earthquake-stricken country. A January 12 earthquake flattened Haiti's capital and killed more than 200,000 people.

"Except for Laura -- the group's leader, who took the responsibility to displace these 33 children, fully knowing she didn't have any legal document that would allow her to do so -- the other nine American citizens didn't know anything about what was going on and I remain convinced that they would not have given their accord," Coq told CNN.

Coq added that Silsby "said she had no intention to do any harm."

Some of the detained Americans have said they thought they were helping orphans, but their interpreters told CNN this week that they were present when group members spoke with some of the children's parents. Some parents in a village outside Port-au-Prince said they had willingly given their children to the Americans, who promised them a better life. The parents also said they were told they could see their children whenever they wanted.

The Dominican consul general has said he warned Silsby about trying to cross the border without proper documents.

Prime Minister Jean-Max Bellerive told CNN's "Larry King Live" Thursday that the judge in the case has three months to decide whether to prosecute. "We hope that he will decide long before those three months," he said. "He can release them, he can ask to prosecute them."

Bellerive told CNN the Haitian government was open to the possibility of the case being transferred to a U.S. court, but he said the request would have to come from the United States. "Until now, I was not asked," he said.

Coq told CNN he had been hired by Eric Thompson, husband of Carla Thompson, one of the arrested missionaries, on behalf of the families.