Passenger who had Arabic flash cards sues over his detainment 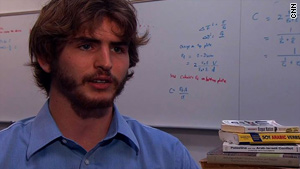 Nicholas George, 22, is a senior at Pomona College in California. He's filed a lawsuit against three agencies.

Nicholas George, 22, a senior at Pomona College in California, filed suit in federal court Wednesday against the Transportation Security Administration, the Philadelphia Police Department and the FBI. He says he was handcuffed and "abusively interrogated" by authorities at Philadelphia International Airport.

"Nick doesn't object and we don't object to the fact that he was searched closely, that his belongings were scrutinized," ACLU attorney Ben Wizner told CNN. "But once that's done, there's absolutely no justification for handcuffing him and locking him in a cell for several hours."

All three agencies named in the suit declined to comment. But one official, who could not speak on the record about matters involving pending litigation, said security agents focused on George because of "erratic" behavior before he reached the checkpoint.

George, of Wyncote, Pennsylvania, said he is studying Arabic because of his interest in Middle East politics. He plans to take a foreign service exam later this year, he said.

"I want to serve my country using my Arabic language," George told CNN. "And it just seems crazy to me that for that I was arrested and treated like a criminal."

He said the incident occurred August 29 after he arrived at the Philadelphia airport for a flight to California to begin his senior year at Pomona College. When he was asked to empty his pockets at the airport checkpoint, he produced a set of handmade flash cards, which piqued the interest of the TSA screener. The flash cards had an English word on one side and the corresponding Arabic word on the other.

Of the approximately 200 flash cards, about 10 had words such as "bomb," "explosion," and "terrorist," George said.

"They asked me why I had those words. I told them honestly because I had been trying to read Arabic news media, especially Al-Jazeera, and these are words that come up when you read the news about the Middle East," George said.

He said he was in the secondary screening area for about a half hour before a TSA supervisor arrived and began questioning him in a "hostile and aggressive manner."

Noting that George had a book titled "Rogue Nation: American Unilateralism and the Failure of Good Intentions," the supervisor asked him a series of questions, including "Who did 9/11?" and "Do you know what language he spoke?" The supervisor then held up the flash cards and said, "Do you see why these cards are suspicious?" George said.

He said he was then turned over to a Philadelphia police officer, who handcuffed him and placed him in an airport jail cell while officers examined his possessions. They "appeared particularly interested in the flash cards" and a student ID card issued to George during a study abroad program in Jordan.

George later was turned over to the FBI, who questioned him for about 30 minutes before freeing him.

"My attitude during all of this was -- just answer the questions fully and honestly. Don't give any lip. Don't do anything that will arouse suspicion, and they'll just pass it by because I had nothing seditious. ... I had nothing dangerous. I had nothing that would pose any threat to anyone," George told CNN.

"I'm absolutely certain that I never raised my voice. I never got smart with them," he said.

George said he is angered by his treatment.

One government official, who spoke on background because of the pending litigation, said TSA behavior detection officers observed George "exhibiting anomalous behavior" before he reached the checkpoint. The official did not elaborate.

George "was referred for additional screening, where his behavior escalated further," the official said. "As a result of a number of factors, including the passenger's erratic behavior, local law enforcement was called to the checkpoint to investigate further."

"We need to really make clear that Americans don't give up their constitutional rights when they choose to fly by plane," he said. "When Nick George was handcuffed, arrested and locked in a cell for several hours just for carrying Arabic-English flash cards, that was not only illegal and unconstitutional but absolutely did nothing to make air travel any safer.

"In fact what it does is it diverts resources from the kind of real security efforts that we need more of."

One year ago, JetBlue Airways and two TSA screeners paid $240,000 to an Iraqi man to settle claims that they refused to let him aboard a flight until he had covered up his T-shirt, which read, "We Will Not be Silent" in English and Arabic.

The man, Raed Jarrar, said one screener told him, "Coming to an airport while wearing a T-shirt with Arabic letters on it was equivalent to going into a bank while wearing a shirt saying, 'I am a robber.' "

In the settlement, JetBlue and the screeners denied any wrongdoing, and said they were acting only to resolve the 2 1/2-year-old federal lawsuit.