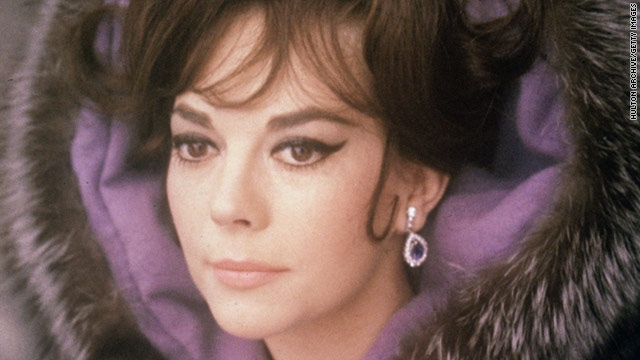 New York (CNN) -- Natalie Wood once said in a televised interview that her greatest fear was of dark seawater. Later, in November 1981, she drowned in the Pacific Ocean off the coast of Catalina Island, California.

The star's drowning death is one of Hollywood's most enduring mysteries. Although the Los Angeles County Coroner's Office ruled that Wood's death was an accident, and the sheriff says the case is closed, others say there are pieces of the puzzle that don't make sense.

The actress' sister, Lana Wood, and the captain of the yacht Natalie Wood sailed with her husband, actor Robert Wagner, are asking the Los Angeles County Sheriff's Office to re-open the case. So far, authorities have not responded to the request.

Lana Wood told CNN that she believes a highly charged argument between her sister and husband on the yacht's back deck preceded Wood's drowning. She told CNN she does not suspect foul play.

"I just want the truth to come out, the real story," she said.

I just want the truth to come out, the real story.
--Lana Wood, sister

Dennis Davern, the former captain of the yacht, "The Splendour," broke his long silence with a detailed account in "Goodbye Natalie, Goodbye Splendour," a book he wrote with his friend Marti Rulli. It was published in September.

Davern also believes Wood's death was a direct result of the fight with Wagner.

Wood first appeared as a child in "Miracle on 34th Street" and starred with some of Hollywood's top leading men -- James Dean in "Rebel Without a Cause" and Warren Beatty in "Splendor in the Grass." She also starred in "West Side Story."

Wagner's success came later, on television. He starred in two long-running series, "It Takes a Thief" and "Hart to Hart."

The couple married in 1957, divorced in 1962, then remarried in 1972. They often sailed their yacht off the coast of California and they invited Wood's then co-star, Christopher Walken, to join them on a sail on Thanksgiving weekend, 1981.

Walken and Wood had been filming "Brainstorm" at the time and the Hollywood rumor mill was abuzz with speculation that Wagner was jealous over Walken. Walken has not spoken publicly about Wood's drowning, and authorities have said he witnessed only the events leading up to an argument between the couple.

Wagner and his representatives did not respond to CNN's request for comment. But Wagner admitted his jealousy in his book "Pieces of My Heart, " also published in September. He acknowledged that there had been a fight with Wood, writing that he smashed a wine bottle on a table.

In a lengthy interview with CNN, Davern said he now believes the investigation of Wood's death was incompetent and suggested there was a cover-up. He said he regrets misleading investigators by keeping quiet at Wagner's request.

After Wagner argued with Walken and broke the wine bottle, Wood left in disgust and went to her stateroom, Davern told CNN. Walken also retired to a guest room, Davern added, and Wagner followed his wife to their room. A few minutes later, Davern said, he could hear the couple fighting.

They'd moved their fight outside. You could tell from their animated gestures they were still arguing.
--Dennis Davern, yacht captain

Embarrassed, Davern said he turned up the volume on his stereo. At one point, Davern recalled, he glanced out of the pilot house window and saw both Wagner and Wood on the yacht's aft deck. "They'd moved their fight outside ... you could tell from their animated gestures they were still arguing," he said.

A short time later, Wagner, appearing to be distraught, told Davern he couldn't find Wood. Davern searched the boat but couldn't find her. He noticed the rubber dinghy also was missing.

Wagner shrugged and poured them both drinks, Davern said. He suggested his wife had probably gone off in a temper.

Wagner's story, as told in his book, differs from Davern's. He maintains that after the argument with Walken, Wood went to her room and prepared for bed while he and Walken sat on the deck, cooling off.

Wagner writes that he went to check on Wood, but she wasn't there. He maintains that he and Davern searched the boat and noticed the dinghy was missing. Wagner wrote that he assumed his wife had gone ashore on her own.

He radioed the restaurant on shore where they'd had dinner and called the harbor master to see if anyone had seen Wood.

Detective Duane Rasure, the lead investigator for the Los Angeles County Sheriff's Office, confirmed that Wagner notified the harbor master that his wife was missing.

But Davern claims those phone calls did not happen immediately. The harbor master at the time, Doug Odin, told CNN he was contacted around 1:30 a.m. He summoned the U.S. Coast Guard, which arrived to begin a daylight search at 5 a.m.

Lt. Roger Smith, a lifeguard with the Los Angeles Fire County Department, questioned Wagner about the delay in summoning help. Wagner said he assumed Wood was "probably just party-hopping on other boats, that's the kind of woman she is ... and I want to keep this out of the public," Smith told CNN.

She was such a little thing.
--Det. Duane Rasure, lead investigator
RELATED TOPICS

Wood's body was found floating in the water about a mile away from the yacht. Investigator Rasure said the official theory is that Wood was awakened by the sound of the dinghy hitting the side of their yacht. Police believe she went to re-tie the dinghy but slipped on the boat's swim step and fell into the water.

The dinghy was found about a mile away from the yacht -- and from where Wood's body was found. "It seems she might have hung onto the dinghy but then got separated from it," Smith said.

According to police reports, Wood was found wearing a long nightgown, socks, and a down jacket.

Rasure told CNN he believes Wood was dragged underwater by her jacket. "She was such a little thing," he said.

The autopsy report shows Wood had two dozen bruises on her body, including a facial abrasion on her left cheek, and bruises on her arms. Rasure said he believes the injuries were sustained from falling overboard and struggling in the water.

"My sister was not a swimmer and did not know how to swim, and she would never go to another boat or to shore dressed in a nightgown and socks," said Lana Wood. She said she believes Davern.

"He was a close family confidant and trusted friend to my sister. He is not a liar," she told CNN.

She said that when she learned her sister was dead, she went immediately to the house to see Wagner. "Robert was laying on their bed, devastated and when I walked into their bedroom he looked up at me crying and whispered, 'It was an accident, you have to believe me, it was an accident.' "

She added, "I don't think R.J. ever got over Natalie's death. She was the love of his life."