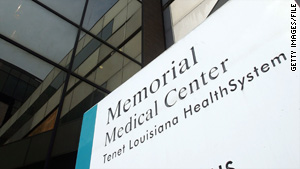 (CNN) -- After reviewing the case of a woman who died at New Orleans, Louisiana's Memorial Hospital in the days after Hurricane Katrina, coroner Frank Minyard said Thursday that he cannot classify her death as a homicide.

Minyard said he hopes his findings on the death of Jannie Burgess, 79, will mark "the end of the Memorial Hospital hurricane situation."

The review was initiated after an August 2009 New York Times article quoted a doctor as saying Memorial patients were given morphine and other drugs after Katrina struck in August 2005, with hospital staff knowing that it could hasten some of the patients' deaths.

Burgess' manner of death is unclassified, the coroner said, and the cause of her death undetermined.

"I don't think -- and I could be wrong -- I don't think the morphine contributed as much to her demise as her physical condition," said Minyard, who's served as the coroner of Orleans Parish since 1974.

"This patient was extremely sick," Minyard said of Burgess. The woman had had surgery a week before and had been on "morphine around the clock. She'd had kidney failure. She'd had liver failure." She also had developed sepsis, or blood poisoning, he said.

Burgess was being treated for advanced uterine cancer and kidney failure, according to the New Orleans Times-Picayune.

Dr. Ewing Cook told the New York Times that he asked a nurse to increase Burgess' morphine and give her "enough until she goes."

"If you don't think that by giving a person a lot of morphine, you're not prematurely sending them to their grave, then you're a very naive doctor," Cook told the Times. "We kill 'em."

On Burgess, he said, "I gave her medicine so I could get rid of her faster, get the nurses off the floor." He added, "There's no question I hastened her demise."

In response to a Times-Picayune report in September, Orleans Parish District Attorney Leon Cannizzaro Jr. said he planned to look into the deaths but stopped short of calling it an investigation. Minyard said Thursday that he had delivered a detailed report to Cannizzaro on Wednesday.

Because she had been receiving morphine, Burgess had naturally developed some tolerance to it, Minyard said. He also took her weight, 240 pounds, into account.

Burgess had received seven 15-milligram shots of morphine and died 3½ hours after receiving the last one, he said. Deaths from morphine, or any narcotic, tend to happen immediately, he said.

Minyard said he believes that Burgess' blood poisoning, along with anemia she had before her surgery, mostly contributed to her death.

He said he doesn't believe that Burgess received enough morphine to kill her.

Minyard said Thursday that when he told Burgess' relatives about his findings, "they were very polite." He said they will come in to speak with him soon.

Katrina roared ashore near the Mississippi-Louisiana state line on August 29, 2005, rupturing three of New Orleans' protective levees and putting about three-quarters of the city under water.

Charles Foti Jr., who was then the state attorney general, launched an investigation after officials from Lifecare, an acute-care facility operating on the seventh floor of Memorial, reported allegations that several seriously ill, mostly elderly patients had been euthanized by medical staff at Memorial as the floodwaters rose around the hospital and conditions inside deteriorated.

In 2006, Foti ordered the arrest of Dr. Anna Pou and two nurses, Lori Budo and Cheri Landry, on preliminary charges of second-degree murder in the deaths of four of the patients.

Former Orleans Parish District Attorney Eddie Jordan, who under Louisiana law was responsible for prosecuting crimes, gave Budo and Landry immunity in exchange for their testimony. In July 2007, a grand jury refused to indict Pou.

Foti said his investigation revealed that the four patients were given a "lethal cocktail" of morphine and midazolam hydrochloride, both central nervous system depressants. The patients were 63, 68, 91 and 93, he said.

Pou, Landry and Budo denied the charges, and their attorneys said they acted heroically, staying to treat patients rather than evacuate.

In an interview with Newsweek magazine in 2007, Pou admitted giving the patients drugs.

"If in doing so it hastened their deaths, then that's what happened," she said. "But this was not 'I'm going to go to the seventh floor and murder some people.' We're here to help patients."

After the grand jury refused to indict Pou, Jordan called the case closed and said he would no longer pursue it.

CNN and the Times-Picayune have filed suit seeking the release of Foti's investigative file into the deaths. CNN was the first to report the allegations of euthanasia, six weeks after the hurricane.

The case went to the Louisiana Supreme Court, which in July sent it back to the trial court to rule on whether criminal charges in the case are reasonably anticipated. No new trial date has been set, Lori Mince, the New Orleans attorney representing the media organization, said Thursday.

Hospital workers identified only as John and Jane Does have sued to block the file's release, claiming that the records are covered by grand jury secrecy rules, that they should have been considered confidential informants and that releasing the documents would violate their privacy.