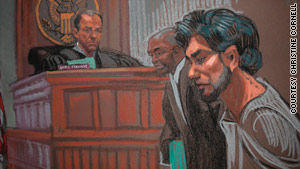 New York (CNN) -- The man accused of attempting to set off a car bomb in Times Square considered other targets in and around New York before the failed attack, an investigator said.

Faisal Shahzad, 30, pondered attacks on Rockefeller Center, Grand Central Terminal, the World Financial Center and Connecticut helicopter manufacturer Sikorsky, going so far as to case some of the targets, a senior counterterrorism official with oversight of the investigation said Tuesday.

Dressed in a gray sweatsuit, free of handcuffs, Shahzad appeared before a federal magistrate on Tuesday afternoon to hear the charges against him. As he walked into courtroom, Shahzad gave a slight smile to his public defender, Julia Gatto. At the end of the hearing, Gatto requested that Shahzad be served halal food -- prepared according to Islamic dietary laws -- while jailed.

Gatto did not object to the government's request that he remain in federal custody. He did not enter a plea, and Magistrate Judge James Francis set his next hearing for June 1.

Shahzad faces five counts in connection with the attempted bombing in Times Square on May 1. He could face life in prison if convicted.

The Pakistani-born naturalized U.S. citizen has been in federal custody since his arrest two days after the bomb attempt. During that time, he "has provided valuable intelligence from which further investigative action has been taken," the U.S. attorney's office said.

Video: Are Shahzad's rights being violated?

Video: Inside the mind of a terrorist
RELATED TOPICS

After 15 days of questioning, Shahzad invoked his right to an attorney at Tuesday's hearing, a federal law enforcement official said.

According to court documents, Shahzad has admitted to law enforcement that he attempted to detonate the bomb and that he recently received bomb-making training in the Waziristan region of Pakistan.

Attorney General Eric Holder has said Shahzad was working with the Pakistani Taliban.

E-mails obtained by CNN indicate he was looking for a way to strike back against "foreign infidel forces" he believed were oppressing the Muslim world. In one, sent to a large group of recipients in February 2006, Shahzad wrote, "Everyone knows how the Muslim country bows down to pressure from the west. Everyone knows the kind of humiliation we are faced with around the globe."

At the time, he had been in the United States for about six years, had earned his MBA and was working as a financial analyst in Connecticut.

CIA Director Leon Panetta and National Security Adviser James Jones are traveling to Pakistan to meet with officials there about the status of the Times Square investigation, a U.S. official said Tuesday. They also plan to discuss efforts to prevent future terrorist attacks in their meetings there, the official added.

The U.S. government wants to see continued Pakistani cooperation in determining what role the Pakistani Taliban may have played in assisting Shahzad. Washington also wants an aggressive push by Pakistani authorities to take action against al Qaeda-linked groups in the largely ungoverned tribal areas along its border with Afghanistan.