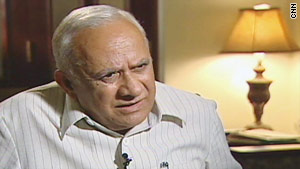 Caterer Rana Ashraf Khan says his son had nothing to do with the Times Square bomb plot.
STORY HIGHLIGHTS
RELATED TOPICS

(CNN) -- The father of a man arrested in Pakistan in connection with the Times Square bombing attempt case vehemently denied that his son had anything to do with the plot.

Salman Ashraf was taken into custody a few days ago, U.S. and Pakistani officials told CNN on Friday.

His father, Rana Ashraf Khan, who owns Hanif Rajput Catering, said he was shocked by the arrest of his son, who had been missing for 12 days.

Khan shook with anger when asked about his son.

"I refute it outright," Khan said. "It is a very wicked accusation. He is not the type of guy who would ever think of involving himself in any criminal activity."

But a U.S. official with knowledge of the case said Friday that Ashraf had been talking to the Taliban about pointing out the Pakistani military and other VIPs at diplomatic and other government events.

Another U.S. official said there were indications that the catering company was going to be used as a cover for an attack in Pakistan.

There is "very specific information about a potential, imminent, plot," the official said. "Initial indications are it is a Pakistani target."

The information about Hanif Rajput Catering surfaced as a result of the Times Square investigation, the official said. Investigators are looking into whether the company has ties to the Pakistani Taliban.

The U.S. Embassy warned American citizens that terrorist groups may have set up ties with the Islamabad caterer, one of Pakistan's largest, and advised them to avoid using the company.

Faisal Shahzad, a 30-year-old Pakistani-American, faces five counts in connection with the botched bomb attempt in New York's Times Square on May 1. He could be sentenced to life in prison if convicted.

He also pondered attacks on Rockefeller Center, Grand Central Terminal, and the World Financial Center in New York City, and Connecticut helicopter manufacturer Sikorsky, going so far as to case some of the targets, according to a senior counterterrorism official with oversight of the investigation.

The concerns about the group are coming from multiple streams of information, including from Shahzad, the officials said.