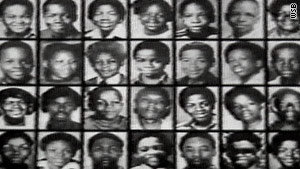 (CNN) -- Below is a list of murder victims whom authorities linked to a string of killings in the Atlanta, Georgia, area from 1979 to 1981.

Deaths were initially part of the official investigation, but police found insufficient evidence to link to a serial killer or anyone else: